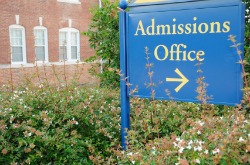 Record numbers of high school students are submitting early applications hoping to gain admission to the institution of their choice. Fortunately for them, recent statistics show that students who apply early are much more likely to be accepted to their desired college than if they applied during the regular cycle, U.S. News & World Report found.

And the advantage they have is significant. In 2009, a typical college's early acceptance rate was 15 percent points higher than its rate for those who sent their applications in by the normal deadlines, which are usually in December or January.

Currently, most of the candidates who submitted early applications have already heard back and schools are reporting record highs in applications received, according to The Huffington Post. Notably, prestigious schools such as Stanford University, Georgetown University and Duke University revealed early acceptance rates of 13 percent, 17 percent and 29 percent, respectively.

Higher acceptance rates for early applicants do not bode well for those seeking to gain admission in the standard pool. In fact, some schools reported filling nearly half of the class of 2015 in the early round--the University of Pennsylvania admitted 49 percent of incoming freshmen, Johns Hopkins University accepted 42 percent and Dartmouth College 40 percent.

Early decision and early action programs have gained popularity in recent years as the college admission process has become increasingly competitive, U.S. News & World Report noted. However, some admissions officials object to the early deadlines, saying that it unfairly favors the wealthy and those who are well acquainted with the process. Poorer or first generation college students, officials argue, oftentimes lack the resources to put together an application by early deadlines. Furthermore, for binding early decision programs, applicants are barred from comparing financial aid packages, another dimension that puts less privileged students at a disadvantage.

"Early programs don't give everybody the same chance," Lloyd Thacker, executive director of Education Conservancy, a nonprofit group that seeks to make admissions practices more equitable, told Bloomberg. "We already know there are many disadvantages and advantages built in related to where students are on the socioeconomic ladder."