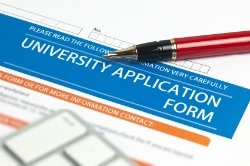 Some of the nation's most selective schools are reporting significant increases in early decision applications. Such applications allow students to apply to colleges early on condition that they must commit to be enrolled in that particular school if accepted.

Maria Laskaris, the college's dean of admissions and financial aid, said in an interview with The Dartmouth that the early decision applicant pool has grown by 40 percent in the last five years. She noted that Dartmouth's recruiting strategy has also evolved.

"Our entire recruitment plan is based on two kinds of principles," Laskaris told The Dartmouth. "One, the academic quality of our student body, and two, the diversity of the student body. As we think about our recruitment efforts and travels, our core message has to do with our commitment to affordability and accessibility and how financial aid works."

As with many selective schools, early decision applicants often make up a large portion of the new freshman class. Dartmouth has accepted an average of 425 students annually through its early decision program over the last four years, comprising approximately 38 percent of the incoming class.

At Brown University, the number of early applications rose about four percent over last year to just over 2,900. Last year, 577 early decision applicants out of 2,796 were accepted to the university.

Jim Miller, Brown's dean of admission, told The Brown Daily Herald that the class of 2016 has about 1,500 spots. He expects the school to receive a total of approximately 30,000 applications this year. Early decision applicants will hear back from the admissions office around mid-December, he said.

As The New York Times reported, Princeton University received early admissions applications from 3,537 students, nearly triple the size of its entire freshman class. However, unlike other early decision programs, Princeton's early-action program is not binding on applicants.