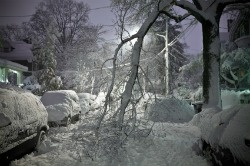 Many colleges and universities have decided to extend deadlines for early decision applications to those affected by the severe snowstorm that struck the Northeast this past weekend.

The New York Times reported that according to the National Association for College Admission Counseling, at least 76 colleges and universities pushed back their November 1 deadlines in response to the storm. Included among those institutions were Boston College, Boston University, Columbia University, Cornell University, Dartmouth College, Harvard University and the University of Vermont.

The storm left millions of residents without electricity in states including New Jersey, Massachusetts, and Connecticut. According to the Times, many high school students camped out in coffee shops looking for electricity and Internet access in order to submit college applications on time.

"It was definitely a little nerve-wracking," said Kate Bullion of Millis, Massachusetts, who submitted her early decision application to Dartmouth on Sunday after spending the day without power. Bullion, who was interviewed by The Dartmouth, said that during the day, she "started freaking out and looking for friends' houses that would have power."

Jeff Neal, a spokesman for Harvard's Faculty of Arts and Sciences, said in an email to The Crimson that the extension was common practice. "We knew from past experience that this would be a concern," he wrote, "and we were aware that other institutions had also extended their deadlines... This extension is not at all unprecedented."

Although the admissions extension was intended for those affected by the storm, high school students in other areas could have taken advantage of the extra time as well. Eric Fulda, the dean of admissions at the University of Pennsylvania, told the Daily Pennsylvanian that the admissions department would not be looking into every case to make sure the applicants were truly impacted.

But many students did not need to take advantage of the deadline extensions because they had been advised to submit their applications in advance. "We submitted our applications early, about a week back," said Judy Fairfull, head guidance counselor at Doherty Memorial High School in Worcester, Massachusetts, who was interviewed by the Times. "We learned our lesson from the ice storm three years ago: Don't wait until the last minute."

Amy Sack, president of a Connecticut-based admissions consulting firm, agreed. "It wasn't a problem," she told the Crimson. "All of my students submitted over a week ago. I always tell them, 'You never know what's going to happen.'"