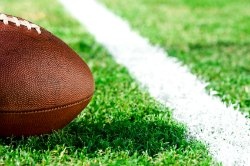 Members of a Michigan university's marching band sported controversial logos on their uniforms this Saturday during the home-opening game, a move that is receiving mixed reviews from administrators, alumni and civil rights groups.

The Detroit News reports that the Eastern Michigan University Marching Band wore two of the university's logos on its uniform during its game against Illinois State on Saturday. One of those logos was the Huron, a mascot that was exchanged for an Eagle in 1991 amid criticism that the former symbol was demeaning to Native Americans.

EMU says that the move is an attempt to nurture unity among current and former students, including many, who never accepted the mascot and logo swap.

"There's a lot of alumni who have and will always consider themselves Hurons," said Geoff Larcom, director of communications at EMU in The Ypsilanti Courier. "It's meant as a nice little gesture to unite alumni."

EMU was founded in 1849 as Michigan State Normal College, and its athletic teams were known as the "Normalites" until a 1929 contest in which the mascot was changed to the Huron. According to The Ypsilanti Courier, the school then changed that mascot in 1991 to the Eagles to be more culturally-sensitive to Native American groups.

"We don't want to have people's race used as mascots because it's often perceived as negative and discriminatory," Jacki Miller, spokeswoman of the Michigan Department of Civil Rights, told the Detroit Free Press. "There's sort of a note of irreverence when people use a mascot like that."

The new uniforms purchased by the school's marching band feature both the former Huron and Normalite logos, but neither of these is actually visible when the top part of the marching band uniform is closed and fastened -- as they are covered by a lapel. Yet, a large "E" embroidered on the marching band caps act as a reminder that the school mascot and school logo remain the Eagles.

"It's important to note, our mascot is not changing," Walter Kraft, EMU's vice president for communications, told the Free Press. "We've been the Eagles for the last 20 years and we will remain the Eagles. We really looked at this as a way to embrace our history and embrace our past and alumni from different eras."

Supporters of the logo's reappearance say that the change will unify the school and, perhaps, boost fundraising.

"It's no secret there are still those disenfranchised people from the logo change," Daniel Mathis, interim executive director of EMU Alumni Relations, told The Detroit News. "It still comes up at pretty much anywhere we travel the country… There are still people who say, 'I will never give a dollar until they change it back.'"