Eating Lunch Away from Work Can Be Detrimental to Productivity, Study Says 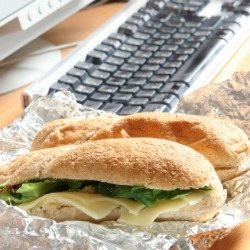 We've all heard that going out for lunch can hurt an employee's pocketbook and waistline. However, new research indicates that leaving work for lunch could also have detrimental effects on a worker's performance, such as reduced "cognitive control and error monitoring." A new study, which was conducted by scientists at Humboldt University in Berlin, surveyed 32 women who lunched in distinctly different settings. One group was allowed 20 minutes to eat at their desk while the others had a leisurely meal at a restaurant with a friend.

According to Business News Daily, the two groups ate identical meals and were tested for cognitive control and neurophysiological response after they finished eating. The study confirmed that employees who chose to eat lunch away from the office returned to work in a sleepy and distracted state, and this relaxed state had the potential to diminish work performance.

"Reduced cognitive control is a disadvantage when close self-monitoring of performance and detailed attention to errors is required, such as in laboratory and factory work or numerical processing," stated the research article published in PLOS ONE. This means that workers who rely on concentration to perform their job duties, such as scientists or accountants, could see decreased performance if they choose to eat lunch away from the office. The article did point out that restaurant lunches could be advantageous to certain types of workers, however. CBS News clarified that individuals who worked in creative fields might benefit from the relaxed state brought on by having lunch with a friend.

Participants in the study chose from pizza, pasta, and non-alcoholic and non-caffeinated drinks, the Washingtonian noted. Employees who dined in a restaurant setting listened to background music while workers who ate at their desks did so in silence. One of the most notable results of the study was the relaxation effect that appeared to impact only the participants who went out for lunch. According to the study's authors, the restaurant meal had the potential to not only affect the employees' performance and cognition but their emotional state as well.

Although the study's authors admit that it was impossible to gauge each individual variable, they hope that their research can be used to create ideal meal solutions for different settings. "Findings from these studies may be of great relevance for the understanding and the deliberate selection and -- eventually -- design of specific meal situations in restaurants and canteens in institutions as diverse as schools, universities, factories, hospitals, military, correctional institutions, or holiday resorts, depending on the overarching goal of these institutions," the research article suggested.

Simply put, workers may want to eat lunch at their desk on days when a significant amount of concentration is required. Furthermore, businesses that want to optimize work quality and output might want to consider providing employees with an incentive to eat lunch at work.

"How about Lunch? Consequences of the Meal Context on Cognition and Emotion," plosone.org, July 2013, Werner Sommer et al.

"Why Eating at Your Desk Isn't So Bad for You," washingtonian.com, August 2, 2013, Melissa Romero

Career and Education News
Home >
News>
Eating Lunch Away from Work Can Be Detrimental to Productivity, Study Says