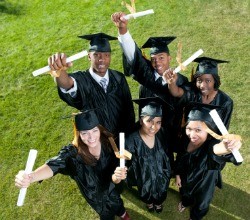 After years of determining college graduation rates based solely on the tracking of full-time, first-time students, the United States Education Department announced last week that it will soon begin to include part-time and transfer students in its tallies.

"Not all students take a linear path in their pursuit of higher education," noted Education Secretary Arne Duncan in a press release. "Many students work full-time and are balancing family obligations while also attending school. These new outcome measures will accurately demonstrate how postsecondary schools are preparing students for success in different ways."

The Education Department's plan carries out the recommendations of the Committee on Measures of Student Success (CMSS), a federal committee that was created to develop alternate measures of student success that are comparable to completion and graduation rates.

The change in the federal data reporting system is a particularly significant one for community colleges and their supporters, who have long complained that the current system does not give credit to thousands of part-time and transfer students. Such students comprise a substantial portion of the community college student population.

"Transfer preparation is such an integral part of the community college mission," explained David Baime, vice president for government relations at the American Association of Community Colleges, who was quoted by Inside Higher Ed. "When that is excluded from the published completion rates, even though the law says that it should be included, it's an affront to the successes of our colleges."

Including transfer and part-time students, however, will likely be complicated. As The Chronicle of Higher Education pointed out, the Education Department will need to decide whether those who earned associate degrees will be considered as transfer students, and how long students will be tracked to determine whether they graduate.

Moreover, the Chronicle noted that currently, many community colleges do not keep track of what happens to the students that leave. A system would need to be created whereby schools could track when students transfer out of state or to for-profit institutions.

Clifford Adelman, a senior associate at the Institute for Higher Education Policy, told the Chronicle that much will depend on "whether the registrars and institutional research can straighten out some of the sloppiness that has accumulated below the surface of the currently simplistic graduation-rate survey reporting." He predicted that it would take several years to develop a uniform system that would be implemented by everyone.