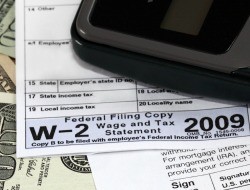 It may be time to examine the efficacy and benefits of tax credits when it comes to higher education, at least according to the U.S. Senate Finance Committee, which met for a hearing earlier this week to discuss higher education tax reform.

Not only does there seem to be a push to help taxpayers better understand how to use various tax benefits, there also seems to be an increasing interest in understanding which benefits are actually helping students to complete an education, not just start one.

"The multitude of education tax benefits can result in complexity and confusion for American families," Senate Finance Chairman Max Baucus said, per Accounting Today. There are currently eight separate tax expenditures related to higher education, and they use five different definitions of "eligible expenses." "Taxpayers must calculate their taxes using each tax cut to determine which one works best."

As MSNBC reports, during the hearing, Baucus expressed his concern with the IRS guide to education tax credits, which totals 87 pages: "Based on the complexity of this guide, one would think the IRS expected all of America's future students to want to major in accounting."

The hearing was planned so that members of the Finance Committee could also discuss the recently released Government Accountability Office report on higher education. That report showed that many higher-education tax benefits are just too difficult for taxpayers to understand or know how to best use. In fact, as Inside Higher Ed explains, the report showed that some 14 percent of tax filers didn't even claim a credit or deduction when they could have, resulting in an average loss of about $466 in savings. Another 250,000 taxpayers failed to file the higher-education claim that would have been most financially advantageous to them.

Another discouraging aspect of the report, according to MSNBC, was the lack of information about which tax breaks are most effective in aiding students' completion of college. In fact, the National Center for Education Statistics reported that 45 percent of students who start at a four-year school do not finish with a degree.

James White, director of Strategic Issues for the GAO, advised that the Department of Education do more targeted research to see the effect of various programs on individuals' access to education.

"We don't know the effect on price (tuition) nor do we understand very well the impact on students' access to education -- the extent to which these programs affect that," he stated.

As MSNBC notes, the Senate Finance Committee also discussed whether higher-education tax breaks drove up the cost of education and whom the tax benefits most helped.

Susan Dynarski, a professor of public policy at the University of Michigan, indicated that she believes education tax benefits should be paid at the same time that tuition is paid.

According to Inside Higher Ed, Dynarsky added, "The current education tax benefits do little to get more people into college....We need a unified system with a single application for families."