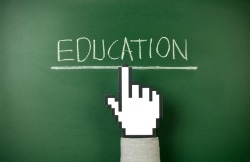 The online learning venture edX is expanding its reach by offering a hybrid computer science and programming course at Bunker Hill and MassBay community colleges in the spring 2013, according to a press release. The two schools are the first community colleges to work with edX.

According to Bloomberg Businessweek, the course will be taught in a "flipped" classroom format, meaning students review material at home and then come to class to work with faculty. EdX already offers a number of online classes to students worldwide, but this collaboration specifically looks at how online learning models can impact large student populations, such as those at community colleges. Anant Agarwal, edX's president and founder, pointed out that the program is funded by The Gates Foundation, which gave $1 million over 18 months to see how effectively online education could boost offerings at community colleges.

"It's been a real challenge for community colleges to get funding and staffing and large numbers of quality courses," Agarwal said in a telephone interview with Bloomberg Businessweek. "Efforts like this can make a real difference."

The two Massachusetts-based community colleges were selected because of their close location as well as the emphases they have placed on online learning. Agarwal also told Bloomberg Businessweek that both colleges had "visionary leadership."

"They're really looking for creative ways to reinvent community colleges," he added.

Most of edX's class are offered free of charge. Bunker Hill, however, will charge students approximately $423 for the course and students will receive three credit hours. The online version of the class already has proven popularity: some 100,000 students have enrolled to take it online, according to Agarwal.

According to USA Today, edX's announcement comes on the heels of other major advances made by online education providers. Last week, the American Council on Education announced it would evaluate several MOOCs to see if they could become eligible for credit and student transfer. Within days of that announcement, a consortium of 10 elite universities revealed their plans to offer online courses with limited enrollment.

"MOOCs are an exciting innovation," said Dan Greenstein, Director of Postsecondary Success at the Gates Foundation, in the press release. "They hold great promise, but are not without challenges -- and we are still discovering their full potential."