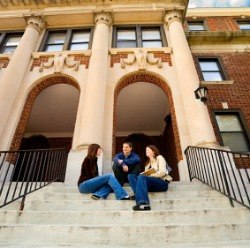 In the face of declining enrollment and negative publicity regarding employment challenges for recent graduates, both colleges and the federal government are taking action to incentivize students to pursue higher education. Ranging from "buy four years, get one free" deals to a database of colleges' graduation rates and employment statistics, these measures are part of a growing trend toward school-based and nationwide policies centering on students' needs before, during, and after college.

The Wall Street Journal reported on Monday that several liberal arts colleges are offering discounted package deals for prospective undergraduates. For example, starting in fall of 2012, Alma College in Michigan began offering free tuition to students after their fourth year in order to illustrate their investment in helping students graduate on time. Their program also offers these students a $2,500 scholarship to put toward a research position or internship. "We're 127 years old, but doing business the same way as we always have isn't going to work for the next 127 years," explained Alma College's President Jeff Abernathy.

Similarly, Spring Arbor University announced in February that it would help to pay a portion of school costs for students who graduate with a job that earns less than $37,000. And Union College in Kentucky has offered students a tuition-free eighth semester as long as they maintain a 3.5 GPA. Liberal arts colleges are not the only institutions taking measures to improve their image with prospective students. According to TIME, the law school at Arizona State University is planning to establish its own non-profit law firm in order to gainfully employ 30 of its graduates. Other law schools have begun implementing fellowships that allow law students to work on public interest projects.

In addition to increased funding and post-graduation options, schools are also working toward more transparency regarding how they spend tuition dollars and where their graduates ultimately might find employment. The Wall Street Journal noted that Augustana College in Illinois is providing the public with details about its spending history to alleviate concerns about wasteful use of tuition funds.

Transparency is a term that has also received much public and government attention of late. Deseret News reported that the Obama administration and the Senate are considering a proposal that would require colleges and universities to post data regarding their graduates' employment rates and average starting salaries. Furthermore, the U.S. Department of Education has created a website for its College Affordability and Transparency Center, which organizes and displays higher education data such as the tuition and graduation rates across the nation's public universities.

These present and planned reforms in America's higher education system could very well be an indication that the current recession, while difficult and frustrating for many, could lead to benefits for future generations by holding colleges and universities more accountable for the services that they provide.