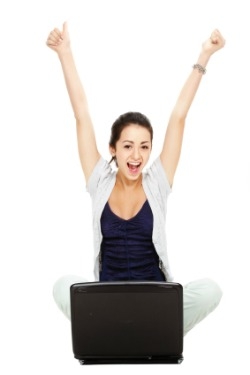 Colleges and universities are increasingly notifying prospective students about acceptance or rejection through phone, email, the Internet, and text messages. But the vast majority of institutions continue to send acceptance letters through regular mail.

As reported by Education Week's "College Bound" blog, data from the National Association for College Admission Counseling indicates that electronic notifications are on the rise: A decade ago, only 11 percent of colleges sent out admissions decisions through email or through the school's website. But a 2010 survey found that 37 percent of institutions notified candidates by email, 43 percent using a website, 46 percent by phone, and 3 percent by text message.

"As our data suggests, the practice of using electronic means to connect with students and inform them of admission decisions is an established process that seems likely to become more prevalent as personal-communications devices figure more prominently in our lives," said David Hawkins, director of public policy and research for NACAC, who was quoted by Education Week.

Nevertheless, the same survey found that 99 percent of colleges and universities still opt to send a letter of acceptance or rejection through the regular mail in addition to electronic notification.

Jay Matthews, writing for The Washington Post, pointed out that Wake Forest University notifies students only through U.S. mail, and speculated that such a policy may indeed make sense.

"I can see how the Web site way is quicker and less frustrating, and eliminates the need to run home at lunch period to see if the mail has arrived," he wrote. "But I still like the mystery and romance of physically holding the envelope and opening it and unfolding the letter. And I think the old way may be less prone to major goofs that result in many people being told they were accepted when the opposite was the case."

Indeed, email notification gaffes have occurred at many colleges. Earlier this year, Christopher Newport University in Virginia accidentally emailed 2,000 acceptance letters to applicants, and apologetically withdrew the offers within a few hours. Similar mistakes have been made at Cornell University, the University of Georgia, the University of California-Berkeley, and the University of North Carolina at Chapel Hill.

Institutions have also discovered that a printed acceptance letter on paper may make the difference to those students who are considering numerous offers.

Kyu Nakama, a student at the Brooklyn Technical High School in New York, wrote in The New York Times' "The Choice" blog that the appearance of the acceptance letter matters. "For example," he wrote, "if I received one acceptance letter that just came in a regular envelope with a bunch of printed papers, and another acceptance letter that came with booklets and a folder and letters printed on high-quality paper, I would feel a lot more wanted and welcome at the latter college... In short, gimmicks work."

"Admissions 101: Do You Prefer College Acceptances and Rejections Be Done by Web Site or Envelope?" washingtonpost.com, March 13, 2012, Jay Matthews