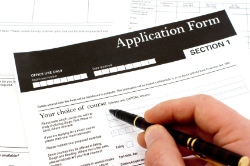 College applications have long asked students questions about their identity--from sex and socioeconomic status to race and religion. Now, one school will be the first to ask students about their sexual orientation and gender identity.

According to The Chronicle of Higher Education, on its 2012-2013 application, Elmhurst College will ask students, "Would you consider yourself to be a member of the LGBT (lesbian, gay, bisexual, transgendered) community?" Applicants can answer "yes", "no" or "prefer not to answer". Or they can choose to skip the question entirely. The question will appear in a section that includes other optional questions about religious affiliation and languages spoken.

"We ask a lot of questions in admissions, so we thought, why not ask about this too?" said Gary Rold, Elmhurst's dean of admissions. "We are trying to recruit students who are academically qualified and diverse, and we consider this another form of diversity."

To be clear, however, Inside Higher Ed noted that the question will not be used in admissions decisions. Instead, The Chronicle of Higher Education reported, admissions officers will use the question to better serve students and connect with them with campus programs and other resources. It will also be used to determine eligibility for institutional scholarships for underrepresented groups.

"By standardizing this question, we can match students up with resources and start to communicate with them," said Shane L. Windmeyer, executive director of advocacy group Campus Pride.

Rold added that the question will also help staff members personalize their contact with prospective students.

Think Progress noted that some 170 universities already provide resources for LGBT students, but none are aware of how many students would actually benefit. As The Chronicle of Higher Education pointed out, no other school asks such a question and colleges that come close only ask students about their interest in LGBT issues.

According to Inside Higher Ed, the board of the Common Application--which Think Progress noted serves over 414 colleges--discussed adding such questions, but rejected the idea.

"Many admission officers and secondary school counselors expressed concern regarding how this question might be perceived by students, even though it would be optional," said the board in a statement. "One common worry was that any potential benefits to adding the question would be outweighed by the anxiety and uncertainty students may experience when deciding if and how they should answer it."

Although Rold took a different approach (Elmhurst is not a member of the Common Application), he acknowledged that creating an application to meet the needs of hundreds of institutions would be difficult. Still, he stood behind his decision to add the question, pointing out that students have the opportunity to answer questions about race or religion.

"Now gay and lesbian students will have the same option," he said. "We thought we should give them the option. It seems fair and consistent."

However, if students do not wish to answer or feel uncomfortable answering, they do not have to.