Embarrassed By Your Messy Office Desk? Don't Be! 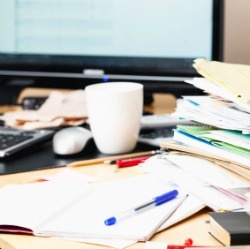 We all know someone in the office who has that desk; the one with so much clutter that you have no idea how they can find anything or get any work done while sitting there. That desk might even be yours! When you are bogged down with deadlines, projects and meetings, it can be difficult to keep your desk spic and span. A recent study published in Psychological Science, however, shows that the disorder might actually be a good thing.

As TIME reported, researchers from the Carlson School of Management at the University of Minnesota sought out to examine how a messy -- and clean -- desk affected people's behavior. The study hypothesized that organized environments encouraged people to behave in a traditional and conventional manner, while disorderly environments encouraged the breaking of tradition and convention.

According to The New York Times, previous research has shown that innately tidy people tend to eat better and live longer and than less conscientiously neat people. Kathleen D. Vohs, a behavioral scientist at the University of Minnesota and lead researcher on the study, wanted to know what would happen if the situation were reversed -- could a clean and organized environment inspire good habits in those who are not innately tidy? To find out, researchers conducted a series of three experiments. In the first experiment, college-age students were asked to fill out questionnaires while sitting in messy or neat office spaces. After 10 minutes, students were offered an apple or chocolate bar to take as they left. Students who had been randomly assigned to sit in orderly offices were twice as likely to take an apple than those who sat within messy spaces.

The second experiment showed that disorderly spaces also seemed to spark creativity. College students were assigned to messy or neat offices and asked to brainstorm new uses for Ping-Pong balls. The students who sat amongst a mess came up with more innovative ideas than those who worked in organized offices, according to two independent judges.

The final experiment gave participants the choice of adding a vitamin boost to a lunchtime smoothie that was called either "new" or "classic". Participants who had worked in messy spaces were more likely to choose the new boost, while those who worked in tidy spaces picked the classic option.

Vohs was surprised by the results, noted The New York Times, as past research has shown that disorder often encourages nonchalance, poor discipline and nihilism. TIME pointed out that this study illustrated that messiness is actually a good thing, leading to creativity and innovation.

"Disorderly environments seem to inspire breaking free of tradition, which can produce fresh insights," said the researchers in The New York Times.

Vohs noted that when applied to certain contexts, these findings could be very useful. For example, she recommended letting entropy have its way if you need to come up with ideas that are outside of the box. However, if you need to be more disciplined or want to eat well, make an effort to keep your office space neat and organized as doing so could help even the naturally messy become more conscientious.

"Before You Straighten Up Your Desk, Read This," healthland.time.com, September 20, 2013, Alice Park

"What a Messy Desk Says About You," well.blogs.nytimes.com, September 19, 2013, Gretchen Reynolds