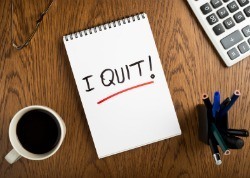 Does your boss make you want to quit your job? If your answer is yes, you are not alone. With the economy finally showing signs of steady improvement as well as the start of a new year, it comes as no surprise that many employees are deciding to leave their terrible bosses behind.

According to a press release, social media-based recruitment agency staffbay.com surveyed 15,000 jobseekers and found that 87.2 percent of respondents said they wanted to leave their current job sometime in 2014. When asked why, more than half -- 52.6 percent -- said it was because they did not trust their boss.

"What the survey shows us is that there is a breakdown between employee and employer -- many of the respondents to our survey said they simply don't trust their boss to do the right thing by them and their career. Others felt they weren't valued at all," said Tony Wilmot, co-founder of staffbay.com, in the press release.

According to PayScale, these findings are in line with a recent Gallup poll that found that 52 percent of workers were not engaged in their work, with another 18 percent reporting that they were actively disengaged. Gallup found that this workplace disengagement was largely a result of bosses either completely ignoring workers or focusing too much on employees' weaknesses.

Managing a team is no easy task, as it requires balancing your own job as well as the expectations for your direct reports. Forbes pointed out that there are many different reasons why employees start to lose trust in their leaders, such as hidden agendas, arrogance or selfishness, inconsistent behavior and a lack of purpose or courage.

Leigh Steere, co-founder of Managing People Better, LLC, a research company that focuses on gender and generational differences in management styles, told CityTownInfo that being a good -- or bad -- manager usually comes down to two behaviors.

"Our company has done a lot of research on what makes a good (or bad) manager, and we've isolated some specific behaviors that good managers have in common," said Steere. "Effective managers have virtually equal access to two skill sets -- relating and requiring -- and they know when to use each… When managers relate and/or require either too little or too much, they reduce their effectiveness." According to Steere, "relating" includes relationship-oriented activities such as asking, listening, coaching and encouraging, while "requiring" includes results-oriented activities such as setting expectations, focusing on goals, striving for excellence, establishing appropriate controls and confronting performance issues.

So what can bosses do to be effective leaders and ensure that they do not lose their employees? Latoya Morris, CEO of Integrity Consulting and Events, LLC and author of "Grace in the Moment: Daily Devotions for Business Women", a professional motivational book that discusses topics such as managing and appreciating your staff, recommended that bosses work on developing a real relationship with direct reports.

Morris went on to say that you can do this by scheduling regular one-on-one lunch meetings with direct reports, which gives you time to catch up on work in a less stressful and more interpersonal environment.

Additionally, it is also important to act ethically and with integrity.

"When you are honest, do what you say, meet expectations, are fair and knowledgeable, your relationship will change to one of trust and respect," explained Morris.

Morris also recommended that managers value and respect their direct reports' professional judgment, regardless of their title, level or function.

In the same vein, as a manager you should also support your direct reports. Do not hide behind clients or upper management. Instead stand up for your team, when appropriate and/or necessary.

"The best thing a manager ever did for me was to 'back me up,'" said Morris.

Inc. also noted that it is important to help set your team up for success, by providing them with the tools and training they need in order to not only achieve their full potential but also continually learn and grow professionally.