Employers Face A Shortage Of Educated Workers By 2018 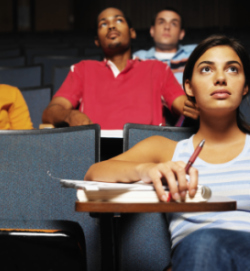 As America slowly recovers from the Recession of 2007, a new problem is expected to arise. According to the New York Times, a report released by the Georgetown University Center on Education and the Workforce shows that the number of jobs requiring at least a two-year associate's degree will outnumber the amount of qualified people to fill those positions by 2018. It is estimated that America will need 22 million new college degrees, but will fall short by at least 3 million workers.

The report shows that far too few Americans are completing college, thus creating disconnect between the types of jobs available and the number of Americans who have the education and training to fill those jobs. Inside Higher Ed points out that there has been an increasing demand for workers with postsecondary education and the trend is only going to grow. In 1937, only 28 percent of jobs required a postsecondary education. By 2018, it is expected that 63 percent will.

According to Georgetown University, the District of Columbia, North Dakota, Minnesota, Massachusetts and Colorado will have the highest number of jobs requiring postsecondary education. Texas, California, Nevada, Mississippi, and Arizona will have the most jobs that do not require a high school or college education. Furthermore, the report forecasts that by 2018, 75-90 percent of jobs in the following sectors will require postsecondary education or training: information services, private education, government and public education, financial services, professional and business services, and healthcare.

Anthony P. Carnevale, the lead author of the report, said in an interview with Inside Higher Ed that these findings should challenge colleges to revamp the current system and be more career-oriented. He says that colleges "need to streamline their programs so they emphasize employability" and encourages schools to move away from "the old model, where you go to college and then go out and find a job" to one where college focuses on "preparing for an occupation". The New York Times adds to this idea, indicating that the report shows that sometimes a certificate in a particular trade or an associate's degree--education that tends to focus on career training--may be as valuable to one's career and income as a traditional four-year bachelor's degree. To prove this, Georgetown University points out that 27 percent of people with certificates and 31 percent of people with A.A. degrees earn more than the average bachelor's degree. Not only does it matter that students go to college, but "what matters the most now is the occupation that they will pursue," says Carnevale during his interview with Inside Higher Ed.