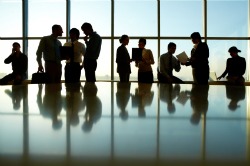 Despite a high unemployment rate and a sluggish economy, recruiters are expecting job prospects for high-level executives to flourish, according to a November survey released by an online networking site.

According to The Huffington Post, employment prospects for senior managers have been growing steadily for 11 consecutive months, gradually building up recruiter confidence in the recovering job market.

ExecuNet Inc., a nationwide career network for managers earning salaries of $100,000 or more, surveyed a sample of recruiters for employment trends among high-level managers. The respondents predicted that 26 percent of companies would add new executive-level positions in the next six months while less than two percent are forecasted to have executive-level layoffs. Even more, 52 percent of employers expected to replace existing senior managers with new talent.

In addition, the survey investigated which job functions would experience the most growth in executive hiring, The Wall Street Journal reported. Business development came in first at 18 percent and sales ranked second at 17 percent. There were 153 executive recruiters polled from various search firms.

Smaller corporations, whose executive hiring campaigns outpace those of larger companies, are spearheading the change toward a more robust economy, CNN Money reported.

"Small-to-medium sized companies are the engine driving a slow but sustained recovery in the market for senior management talent," ExecuNet President and Chief Economist Mark Anderson said. "They're creating new executive roles at twice the pace of their larger competitors."

Although the job outlook for executives with $100,000-plus salaries appears to be undeniably promising, prospects for employees with lesser incomes are encouraging as well.

The health care, pharmaceuticals and technology industries, which typically tolerate recession woes better than other sectors, are adding the most managers to their payrolls.

Anderson added that job seekers should be ready to step into a new role and immediately add value to a company, especially if they come from well-established backgrounds.

"The $50 million company trying to get to $100 million often looks for experienced people from bigger companies who can help them get there," Anderson said. "Don't overlook private companies, many of which fared better in the recession than public ones, in part because they didn't suffer the huge swings in stock prices that slammed their publicly held brethren."