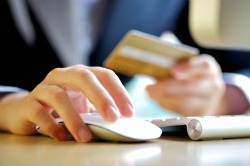 To take advantage of special deals and other consumer incentives, approximately 72 million people are expected to log online today, Cyber Monday, to do their holiday shopping, reported the Los Angeles Times. A CareerBuilder survey showed that 16 percent of surveyed employees said they plan to shop online today while at work and 49 percent said they intend to go online and shop at work some time during the holiday season.

The survey, conducted by Harris Interactive from August 13 to September 6, included responses from 2,400 employers and more than 3,900 employees. While many said they planned to shop online today, an even greater number of employees said they would shop online well past Cyber Monday. Thirty percent of respondents said they were most likely to shop from work after December 7, according to a CareerBuilder press release.

Rosemary Haefner, vice president of human resources at CareerBuilder, warned these at-work shoppers to be mindful of employer policies that might prohibit personal Internet use while on the job.

"It is the employee's responsibility to know and adhere to their company's policy regarding Internet usage," Haefner told the Los Angeles Times. "Be aware of how you spend time on the Web, and don't let your holiday shopping get in the way of your productivity."

More employers, however, could be loosening the reins on holiday shopping at work. According to The Virginian-Pilot, a Robert Half Technology survey showed that the number of employers blocking access to online shopping sites at work dropped from 60 percent in 2011 to 33 percent this year. Similar to employers providing on-site gyms and cafeterias, this could be due to employers wanting to keep workers close to the office, noted Chris McCrea, regional vice president for Robert Half Technology.

"[Companies] want employees to stay close to work," he explained in The Virginian-Pilot. "You get more work and productivity out of them by being in the office."

Others suggested that employer leniency could simply be a sign of the times, and that companies are beginning to be more accepting of such trends in today's technology-driven workplace.

"With the advent of smartphones, even if you don't allow [employees] to [shop online] on their own computer, it's going to happen anyway," Rozanne Worrell, a career consultant, told The Virginian-Pilot. Still, she added that it's important "to maintain your workforce productivity, as well as your employee morale."

"Half of Workers Plan to Do Some Online Shopping at Work, CareerBuilder Study Finds," prnewswire.com, November 23, 2012