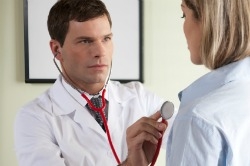 The rising cost of health care has forced some employers to take matters into their own hands--in an effort to curb costs, some companies are opening their own full-service medical clinics for employees.

According to Fortune, big name companies, such as Intel, Hewlett-Packard and Michelin North America, have opened their own on-site medical clinics to lower insurance costs, improve worker health and increase productivity. While on-site clinics help employers curb health care costs--which have gone up 36 percent over the past five years--they also offer a much more convenient option for workers. With no drive time, no long waits and no rush to get back to the office, employers hope on-site clinics will encourage employees to see a doctor regularly, therefore, preventing more serious--and costly--medical problems or diseases down the road.

"It's the right thing to do," said Tami Graham, Intel's director of global benefits design. "People have come in because it was convenient, and they're finding life-threatening issues they wouldn't have known about, and they're taking action."

As Kaiser Health News reported, workplace health clinics used to treat only people who were injured on the job. While that is still a function, in recent years some larger companies have expanded clinics in order to also provide primary health care services. According to consulting firm Mercer, in 2010, 15 percent of employers with 500 or more workers had their own primary care clinic and another 10 percent said they were considering providing such service this year or next.

The Los Angeles Times pointed out that while executives do want to keep their workers healthy, they ultimately want to help the bottom line by reducing absenteeism and slashing medical bills, which raises concerns for some. Skeptics have questioned the quality of on-site clinic care, arguing that corporate bosses may interfere and pressure doctors to understate illnesses in order to keep costs down. Some also worry about employers having access to workers' private medical information.

Doctors at several companies, however, stated that they practice medicine and follow federal privacy laws at on-site clinics the same way any doctor would at a traditional hospital.

Kaiser Health News noted that opening an on-site clinic is no small investment, which makes the option feasible only for employers with at least several hundred workers in one location. Furthermore, Fortune pointed out that even for large companies, it still takes a few years for the company to actually start saving. Intel, for example, breaks even on operating costs at its two clinics in Arizona. For this reason, some clinics supplement rather than replace a worker's primary care doctor. Other smaller companies have also banded together to operate joint clinics.

According to the Los Angeles Times, employees seem to appreciate the convenience of having medical care close by.

"It saves me a lot of time," said Qualcomm software engineer Praveen Samudrala. "I don't go to outside doctors anymore."