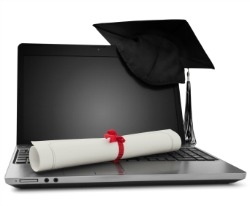 How Do Employers View Online Degrees?

Online degrees used to carry a stigma of not being as academically rigorous as degrees earned on-campus. However, this mindset is changing among academics, employers and the general public. For example, while a Pew Research Center study (PDF) found that only 29 percent of American adults believed online degrees were as valuable as traditional degrees in 2011, a study by FTI Consulting just one year later discovered that nearly half of American adults believed that an online degree program can provide an education similar in quality to that of an on-campus program.

In addition, many notable universities and colleges are endorsing online education as a way to enhance the quality, efficiency and reach of higher education. In a recent article for TIME, MIT president L. Rafael Raif argued that digital learning "is incomparably good at opening possibilities for billions of human beings who have little or no other access to higher learning." Raif believes that "digital learning also offers surprising advantages even for students with access to the best educational resources," and cites the fact that online modules allow for a more interactive and flexible learning experience for students.

Other schools are demonstrating their support for online degrees by offering some of their own. The New York Times recently published an article announcing that the Georgia Institute of Technology will offer a master's degree in computer science entirely online this coming January. University of Maryland physicist S. James Gates Jr. described the program as potentially "epoch-making." "If it really works, it could begin the process of lowering the cost of education, and lowering barriers for millions of Americans," he told The New York Times.

Similarly, according to CNBC, the Kenan-Flager Business School at the University of North Carolina-Chapel Hill began offering an online version of its MBA program in 2011, the first to be offered by a top-20 business school according to its associate dean, Doug Shackelford. Two years after the program's inception, this online MBA program now has 460 enrolled students. These developments suggest that taking college courses or even earning a graduate degree online has been gaining acceptance among both faculty and students.

Going to an online college: Pros and cons in the eyes of employers

But, general public sentiment and university endorsements aside, how do employers view online degrees? A study released this September by Public Agenda found that, while larger public opinion of online education is gradually shifting to become more accepting and even favorable, many employers remain wary of online education. In its survey of 656 HR professionals, Public Agenda found that 42 percent of employers believe online-only degree programs teach students less than traditional on-campus programs; 49 percent of employers believe learning outcomes between the two degree types are about the same, and only 4 percent believe that online education is better than traditional programs. Furthermore, 50 percent of the employers Public Agenda surveyed did not agree with the following statement, "Online-only degree and certificates provide real opportunities for younger, first-time college students to get a high-quality education."

Despite some employers' reluctance to view online degrees as equivalent to traditional credentials, the perception of online education can also differ among employers depending on a candidate's field of study, degree pursued, and other qualifications. Josh Berry, managing partner at the employee motivation consulting company Pruvio, offered CityTownInfo his perspective on employers' receptivity to online degrees.

"In general what I have seen is that organizations still put a lot of emphasis on education and where individuals went to school as part of the hiring process," he explains, but adds, "I think it changes a lot based upon the type of role the person is going into, or the culture of the organization that the person is going into. … [If you are] going to a highly professional, older organization, where you went to school and whether it was a traditional or online program pays a lot of credence. In terms of some of the younger organizations or less technical roles, I see much more openness."

Indeed, there are some cases in which an online degree or certificate yields an appreciable advantage, according to Berry. "The person who did a traditional degree and then attends additional courses online or gets a certificate of business excellence from Columbia University or goes and attends a couple weeks at Harvard or Stanford … [is seen] very, very highly. I think people see a lot of great value in [these online post-graduate degrees], especially in my world and the types of people I was hiring for, because it shows additional initiative and I think they teach nice relevant practical [topics]."

Of undergraduate degrees earned entirely online, Berry says, "The more entry level the job, I see more acceptance and openness to it. [You] don't see anybody really having a big acceptance level for someone who earned their medical degree online. It all just depends upon the technical requirements and what is at stake at the job."

The prestige of the institution offering the online degree also plays a significant role in employers' perceptions. According to Drexel University, which developed an infographic that addresses hiring managers' receptiveness to online degrees, employers view online degrees as comparable to traditional degrees if they fulfill the following criteria:

Furthermore, online education at notable institutions has been a fairly new endeavor and when choosing between online and traditional colleges, there are times when the on-campus degree can yield better results. Jim Del Greco, director of professional staffing company Global Employment solutions, explains to CNBC, "If you are talking about an equal school in prestige and academics … then bricks and mortar trump online, from what I have seen."

Nevertheless, Greco also points out that online degrees are addressing an unmet need for motivated professionals who can't or don't want to stop working as they advance their education. "Without a doubt, online is up and coming," he noted. "People are very busy and they want education. … And we are more comfortable with technology."

Case in point: According to CNBC, another well-established business school -- Carnegie Mellon's Tepper School of Business -- has decided to launch its own hybrid MBA program that couples online instruction with in-person weekend classes.

The development of high quality online education programs from elite institutions is still in its initial stages, with schools, employers and students still unsure of how to approach online degrees. However, as surveys and current student enrollment numbers suggest, people are not only receptive to, but also excited about the changing landscape of higher education and the opportunities it affords.

Interview with Josh Berry, by Kaitlin Louie for CityTownInfo, 16 September 2013