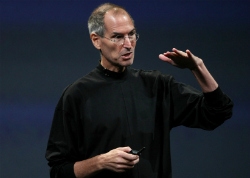 Twenty four hours ago, the world was hit with shocking news--creative genius, pioneer and visionary Steve Jobs had passed away at the young age of 56. In true technology fashion, the news went viral in a matter of seconds--headlines were blasted, tweets and emails were sent, and even Wikipedia was updated before Apple's homepage tribute went up. The digital world was rocked.

As The Wall Street Journal reported, people from around the world mourned the death of Steve Jobs. Those young and old, from casual Apple users to die-hard Mac aficionados, gathered at Apple stores worldwide, held outdoor vigils and flooded Facebook and Twitter with images and quotes to pay tribute to the man who changed the way the world consumed digital content.

"This is truly the end of an era," said Xie Fei, a mourner who was interviewed by The Wall Street Journal outside the Apple store in the Sanlitun shopping area in Beijing.

Another Apple devotee, Adam Palazzo said, "Apple has been a part of my life since I was a kid. It is the passing of somebody who had an impact on my life." Palazzo, a San Francisco resident, took part in an "iPhone vigil" with several other Apple fans late Wednesday in San Francisco's Dolores Park.

Though Mr. Jobs created products that appealed to everyone, The Washington Post noted that Apple and Mr. Jobs had a significant impact on college students and 20-somethings, otherwise known as Generation Y or millennials. A quick survey of a college student's backpack or dormitory and one can tell that Apple is more than just a personal computer; it's a lifestyle that many students quickly embraced.

"Once you get into the circle, it's hard to get out," explained B-school student and Apple addict Amadou Frank to The Wall Street Journal.

MSNBC noted that to some students Mr. Jobs was a hero.

"My teachers asked me what kind of person I wanted to be and I told them I wanted to be like Steve," said Henry Men Youngfan, a graduate student at Peking University's college of engineering.

So why are millennials such devoted Apple followers? Jenna Johnson of The Washington Post speculated that it's partly because they grew up alongside the brand. From the elementary school days of playing Oregon Trail on old school Macintoshes with floppy disk drives to brightly colored iMac G3s, then compact iBooks and now MacBooks. Millennials retired their Sony Walkmans for sleek iPods and discovered that the phone can do more than just receive audio calls. Whether it was the desire to be unique, the education discount or pure nostalgia, as Apple evolved, millennials were right there, ready to "Think different".

As MSNBC pointed out, many Apple fanatics, particularly tech savvy college students, put Mr. Jobs on a pedestal alongside great innovators such as Albert Einstein and Thomas Edison, as well as celebrities like Michael Jackson and Princess Diana. And while some may not agree with that, no one underestimates the profound impact Mr. Jobs had on technology and communication. He inspired an entire generation to be creative. So much so that even corporate rivals had a moment of silence.

"The digital age has lost its leading light, but Steve's innovation and creativity will inspire dreamers and thinkers for generations," said Sony Corp. President and Chief Executive Howard Stringer.