Engineering Degrees Pay Off…Social Work Not So Much, Study Shows 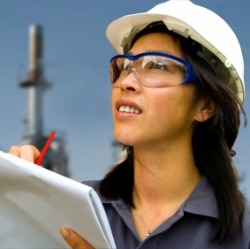 What you study may be much more important than where you study, according to Payscale's College Salary report. The new study, which was released Thursday, reveals that college major may play a bigger role in lifetime earnings than was once thought. And even though many students choose to follow their passion instead of the money trail, it's making more and more sense to take a long, hard look at future earnings before investing heavily in a college education. So, what did the study reveal? For starters, technology and engineering degrees provide the highest return of investment for college graduates by far.

"The current economy is evolving to a more technological and analytical base," Katie Bardaro, lead economist at Payscale, told Business Insider. "If you're trying to make an educational choice now, engineering and math are likely to have a long leg." Bardaro's advice is based on the obvious salary advantage for graduates in those fields. For instance, study results showed that petroleum engineers brought in a median wage of $120,000. Aerospace engineering, chemical engineering, and electrical engineering paid a median wage of $87,000, $86,000, and $85,000 respectively. Other engineering professions ranked high on the list as well with 8 out of the top 10 highest paying careers in the field.

Those in mathematics and computer science or pharmaceutical sciences and administration also fared well, with annual median earnings of $98,000 and $105,000 respectively, notes NPR. However, choosing the wrong college major could lead to a lifetime of dismal earnings, according to the study. For example, graduates with a degree in counseling psychology reported an annual median wage of only $29,000, notes First Coast News. Other careers in the social sciences followed suit with those in early childhood education making $36,000, theology and religious vocations making $38,000, human services and community organization professionals making $38,000, and social workers bringing in $39,000. With the high cost of a college education, many students may be left to wonder if pursuing their dream career could cause more harm than good. And, with study results like these, you certainly can't blame them.

While the study's findings may be shocking, they aren't meant to steer students away from or toward specific fields, notes New York Daily News. In fact, the authors of the study only hope to shed light on the reality of the situation. Once students see the numbers on paper, they're more able to make an informed decision.

"While going to college is undoubtedly a wise decision, what you take while you're there matters a lot, too," authors of the study, Anthony Carnevale, Jeff Strohl and Michelle Meltonan, wrote. Furthermore, choosing to attend a prestigious school may not actually net you any more money than if you had chosen to go the less expensive route. "If you go to Harvard and pay all that money and become a school teacher, you won't be earning more than other school teachers," Carnevale told NPR.