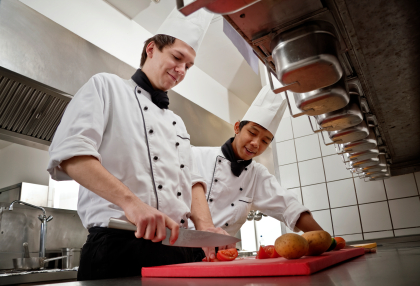 More people appear to be setting their sights on culinary careers.

"There's been a huge, huge interest in cooking schools," noted Irena Chalmers, an instructor at the Culinary Institute of America in Hyde Park, New York, who was interviewed by The New York Post. In the past six years, applications surged almost 50 percent at CIA, and the school added a satellite campus to help meet the demand.

The economy has contributed to the spike in applications because laid-off employees are searching for recession-proof retraining options. "There will always be jobs in the culinary field," noted Dorothy Hamilton, founder of the French Culinary Institute, who was quoted in the Post. Some up-and-coming culinary jobs include positions at food TV networks, chefs at institutional food establishments, and personal chefs.

Joshua Pizarro, a culinary student at the Career Academy of New York, told The New York Times that he decided to study the culinary arts after coming to the conclusion that his former job working for a fashion company had limited opportunities for growth.

"Regardless of a recession, people need to eat," he was quoted as saying in the Times. "And I want to make sure that I'm the one that serves you, and I want to serve you not good food but great food. And here at CANY, they're really giving us a good foundation."

The Tampa Bay Business Journal in Florida reports that according to the U.S. Bureau of Labor Statistics, employment of chefs, head cooks and food preparation and serving supervisors is expected to increase 6 percent by 2018.

"Our enrollment growth has been phenomenal," said Fred Jaeger, the culinary arts program manager at Hillsborough Community College, who was interviewed by the Business Journal. "Every single class has been overloaded. We're teaching as many classes as we can because our enrollment is at an all-time high."

He added that demand for culinary experts is likely to rise. "There is a dramatic need to train high-skilled employees for the restaurant and hospitality industries," Jaeger said.

Schools are responding to the demand by adding classes and equipment. HCC recently invested in two new convection ovens and a fryer heat station. Keiser University expects to begin construction this year on two new kitchens.

"We see the growth continuing through at least next year," said Michele Morgan, the school's president. "We don't see it turning anytime soon."