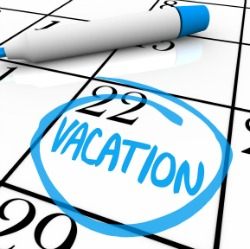 Did you take a vacation this year? According to the findings of a recent study, chances are your answer is no.

CNN reported that Expedia.com released its 13th annual vacation deprivation study, which surveyed 8,535 full-time, part-time and self-employed working adults from 24 countries in North America, Europe, Brazil and the Asia-Pacific region to analyze vacation habits and attitudes across the globe. According to a press release, work-life balance varied greatly between countries. Americans, for example, used just 10 days of their allotted 14 vacation days. That means that, based on Bureau of Labor Statistics data, Americans collectively forfeited more than five hundred million days of vacation.

On the other end of the spectrum -- and not surprisingly -- the press release noted that the French took advantage of all 30 possible vacation days they are given. Ninety percent of employed French adults, however, reported that they still feel vacation deprived. This could be due to the fact that most of the French (93 percent) said they "constantly, regularly or sometimes" check work emails and voicemails while on vacation. Other countries where workers stayed connected to the office during vacation included India (94 percent), Thailand (92 percent), Malaysia (91 percent) and Mexico (91 percent). Interestingly, CNN noted that, compared to the French, Americans are not as vacation deprived -- about 59 percent of Americans said they feel vacation deprived even though they take far fewer days off than the French. Perhaps this is because Americans actually do a decent job of disconnecting when on vacation -- 67 percent said they check email or voicemail while on holiday.

Despite the worldwide belief that Americans work too much, the study showed that they are not the most vacation deprived. Workers in Japan get more vacation days than Americans, but take less time off. Of the 18 vacation days that the Japanese receive, only 7 are used. In South Korea, working adults get 10 vacation days, but also only take 7. Similar trends were found in Thailand and Malaysia.

When asked why they did not use vacation days, respondents listed a variety of reasons. According to the press release, the most common excuse was a desire to save up -- a quarter of respondents who had unused vacation days said they wanted to accumulate time off for potential future trips. Other reasons included difficulties with scheduling (22 percent), preference to be paid for unused time off (18 percent), financial concerns (16 percent), failure to plan ahead (15 percent), too much work at the office (11 percent), workplace insecurity (8 percent) and unsupportive bosses (8 percent).

While it may not always be easy to get away from the demands of the office, John Morrey, vice president and general manager of Expedia, pointed out that doing so has its benefits.

"No one retires wishing they'd spent more time at their desk," Morrey said in the study. "There are countless reasons that vacation days go unused -- failure to plan, worry, forgetfulness, you name it. But rested employees are more productive employees, so taking regular vacations may well help the company than failing to do so."