Experts Disagree About Worth Of Ivy League Degrees 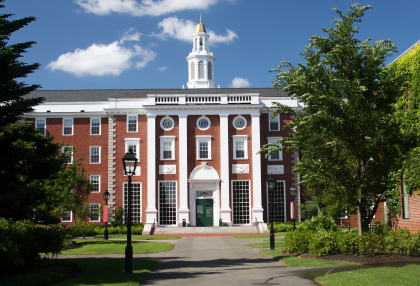 Will graduating from an Ivy League institution ensure one's success? The answer: Not necessarily.

To be sure, an education at one of the country's more selective universities can certainly help. Richard D. Kahlenberg writes in The Washington Post that obtaining a degree from an Ivy League school "may indeed be worth the money. The least selective colleges spend about $12,000 per student, compared with $92,000 per student at the most selective schools."

He adds that selective colleges have higher retention rates, and future earnings average about 45 percent higher for students who received degrees from more selective institutions than from less selective ones. Finally, "according to research by Thomas Dye, 54 percent of America's top 4,325 corporate leaders are graduates of just 12 institutions."

MSNBC.com acknowledges that some employers specifically look for Ivy League graduates. "We don't limit ourselves to only Ivy Leaguers, but we certainly begin our search there," said Dan Josebachvili, director of Urban Escapes, an outdoor excursion company. He told MSNBC.com that five of the company's eight employees have Ivy League degrees, as do 80 percent of its interns.

Many people are clearly hungry for the prestige of attending the nation's top schools. This year, Harvard received over 30,000 applications and accepted only 2,100, or 6.9 percent, of its applicants--a record low. Stanford received over 32,000 applications this year and accepted 2,300 students, or 7.2 percent. Other selective schools reported similarly low figures, including Yale (7.5 percent), Princeton (8.2 percent), Columbia (9.2 percent) and Brown (9.3 percent).

But Sheila Curran, a career and organizational consultant who was interviewed by MSNBC.com, noted that most people can succeed with any degree from any school. "The Ivy League can open doors for you, through alumni and for interviews," she said. "But there is a lot of hype about the Ivy League that is simply not true."

An Ivy League degree, say some experts, will help--but only to a certain point. "Employers are looking for decision makers, decision implementers, and leaders," said Bruce Hurwitz, president of Hurwitz Strategic Staffing, who was quoted by MSNBC.com. "It does not matter where you go to school; what matter is whether or not you can deliver the goods."

"Before They Were Titans, Moguls and Newsmakers, These People Were. . .Rejected," The Wall Street Journal, March 24, 2010, Sue Shellenbarger