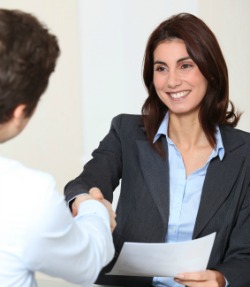 For many people, 2013 will bring a fresh start to the job search. However, a good number of job seekers still have residual discouragement from past rejections in 2012. While much of this disappointment can be attributed to the tough job market of the time, there are many ways in which prospective employees can empower themselves and increase their chances of earning a rewarding job. In fact, several career experts believe that simply reframing your attitude, networking approach, and the way in which you tell your story to prospective employers can make a huge difference in your chances of finding a rewarding job.

While numerous “thanks, but no thanks” emails can dishearten even the most diligent applicant, career experts insist that a positive outlook is a very important element of job search success. According to Forbes, career advisor Carol Camerino tells her clients not to eliminate social time, as it keeps them in a healthy and personable state of mind, and employers are more likely to hire candidates whom they see as friendly and a good social fit for their department. Making time for friends also increases one’s chances of meeting people who might know of interesting job openings. Additionally, US News suggested not simply focusing on one’s own job search, but also extending a helping hand to others in similar situations. Such gestures are not only thoughtful, but also potentially quite helpful in the long-run, as it strengthens one’s network.

Camerino tells people to approach the job search in the same way that a company would approach its marketing strategy. “It’s a brand campaign. You’re trying to get people interested in the brand of you,” she stated. Camerino suggests that, rather than thinking of one’s resume as a list of accomplishments, one should see it as a marketing tool that requires regular updates and improvements. Other ways to promote one’s “brand” include optimizing one’s presence on social media sites such as LinkedIn, Pinterest, Facebook, and Twitter.

Career expert Marty Nemko emphasizes the importance of a resume that tells a compelling narrative in his article for AOL. “[R]esumes filled with jobseeker-speak tend to make employers roll their eyes,” he said. In contrast, “[a]dding two or three brief anecdotes describing a problem you faced, the impressive way you approached it, and the positive result, makes your resume more likely to sail to the top of the pile.” Storytelling (as long as it’s factual) is also very useful in other aspects of the job application process, Nemko commented. He suggests that applicants “practice telling [their] story in 10-, 30-, and 60-second versions” and then calling various people at different companies that interest them for informational interviews, citing how he has seen this strategy “pay off many times.”

Above all, career advisors tell candidates to truly invest time in the search and application processes, while also maintaining their determination and confidence. “If you’re looking for a full-time job, you need to spend full-time hours looking,” Camerino told Forbes, "Finding a job is a job." Similarly, Nemko explained his view on the time and effort required to succeed in today’s job market: “[I]f you fail 99 of 100 times, you win—but not if you quit early.”