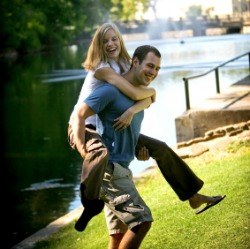 Earlier this year, Princeton University alumna Susan Patton made headlines when she penned an open letter to her alma mater's student newspaper advising young women to find husbands in college. While her advice was geared specifically to Ivy League women, her sentiment launched a national debate about how spouse-hunting should fit into the college experience -- if at all -- and whether these relationships are built to last. Just how many college students actually meet their future spouses in college, and are some schools more likely to foster young marriages than others? A new Facebook study sought to find out.

The study, from the Facebook Data Science team, used personal data from the social networking site's member pool to identify relationships between educational institutions and marriage. Or -- in simpler terms -- it tried to figure out how many college relationships make it all the way to the altar. Researchers tallied the percentage of married couples who share a college alma mater, considering only institutions with more than a thousand married alums. It is not a specific science since, according to Facebook, there is no way to know for certain that the happy couple actually met or started dating in school, but the data does highlight a number of interesting trends.

According to the study, about 28 percent of married, college educated Facebook members attended the same university as their spouses, but the trend is much more prevalent at some schools than others. The top three colleges where women are most likely to meet their spouses are Rose-Hulman Institute of Technology, Michigan Technological University and the U.S. Air Force Academy. The top three schools for men: Faith Baptist Bible College and Theological Seminary, Harding University and Martin Luther College. When calculating the top 25 schools for marriage for each sex, however, there were nine total shared institutions, suggesting that some schools are more likely to promote marriage -- consciously or otherwise -- than others.

What characteristics make a certain school more likely to foster young marriages? According to Digital Trends, the data suggests a connection between religiosity and political affiliation and marriage: The more religious or conservative a school is, the more married alums they seem to produce. The same holds true for military institutions. Author Dr. Ramani Durvasula, a Psychology professor at California State University Los Angeles and recurring expert guest on The Dr. Oz Show, suggests this makes sense.

"[Religious] schools are likely to have a culture that fosters schema like marriage and family," Durvasula told CityTownInfo. She added that military institutions are perhaps more socially "fortress like," meaning there are fewer options for students to meet potential partners. The same goes for rural institutions, she notes. "Many of these schools were not in major urban areas."

Socio-political relationships aside, are there, perhaps, other factors that make college a suitable place to meet a partner. Dr. Alicia H. Clark, a Licensed Clinical Psychologist in the Washington DC metro, told CityTownInfo that personal psychology and the nature of the college experience play a role.

"During this time of intense study and social immersion, young people set about to become who they are going to be as adults," said Clark, noting that this is a period when interests, behavior patterns and friendships are often established for life. "It is not at all surprising that some relationships would be laid down for life too, as mating is considered a normal developmental challenge of our twenties." She notes that the student lifestyle also contributes to the trend, since colleges are comprised of students in a similar age set who "have chosen the same school, which could suggest a similarity of values and culture."

Which brings us back to Patton and the debate her column stirred. If finding a partner in college may seem natural in many ways, does that mean it is wise to do so? The answer, of course, varies from one person to the next, but Dr. Durvasula suggests there are a number of reasons to wait -- especially among young women like those Patton advised. She told CityTownInfo that as a feminist who mentors female students, she promotes the building of financial autonomy during college before marriage.

"Too many women still face a 1950's era pressure for white dresses, motherhood and picket fences - and there is plenty of time for that," said Durvasula. "I had hoped that the Mrs. degree was a thing of the past - but in its own retro way it keeps creeping back into the public consciousness." This is not to say Ramani believes students should not date. Quite the contrary."College is a great place to exercise your dating chops," said Ramani. "Never again will you live amidst such a robust pool of interesting partners."

Clark, on the other hand, suggests focusing on yourself and playing the relationship game by ear.

"[Pick] a college, job, or location that is the best fit for you, be happy, and engage socially," said Clark, noting that studies suggest happiness is one of the single most attractive features partners find in one another. "If you are happy, stimulated, and at your best, meeting someone who is drawn to your happiness and can help you stay happy will happen."

"FACEBOOK DIVES INTO ITS DATA TO FIND OUT IF ALL THOSE CUTE COLLEGE COUPLES WILL LAST," digitaltrends, October 8, 2013, Katie Knibbs, http://www.digitaltrends.com/social-media/3-things-facebook-data-tells-us-about-marriage/