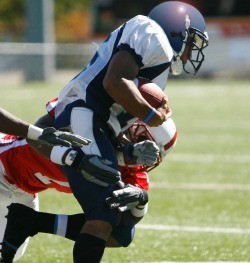 There is a major debate simmering about whether or not college athletes -- who make their sports programs a great deal of money -- should be paid a salary. Schools, coaches and the National Collegiate Athletic Association (NCAA) have come out against the idea, and according to NBC Sports, they may have good reason: A recent study suggested that fair compensation for players could quickly become so expensive that some programs would be forced to throw in the towel entirely.

A new study from Drexel University and the National College Players Association (NCPA) calculated the fair market value of college athletes between 2011 and 2015 if they had earned a salary -- something strictly banned by the NCAA. According to the report, the average salary for a football player would have been $178,000, with big stars such as Johnny Manziel earning as much as $547,000, NBC News reported. Basketball players were worth even more, garnering a fair-market value of $375,000 for the average player. Powerhouse players such as Andrew Wiggins of Kansas, meanwhile, might be worth more than $1.6 million.

The NCPA supports the unionization and payment of college athletes, The Washington Post stated. The study's methodology has yet to be revealed, but it is a starting point in the debate over what college athletes are really worth.

"The bidding war for athletes would likely be in the millions," Ellen Staurowsky, a Drexel sports management professor and co-author of the report, told NBC News. "However, I think it all depends on whether or not a players' association ends up representing the teams and players. The salaries could be effectively bargained to have some sort of minimum guaranteed salary for all."

Schools currently make a great deal of money off of college athletes -- $10.6 billion in 2012 -- who are often compensated in scholarship funds that tend to fall short of players' needs. According to the report, the average "full" athletic scholarship at a Football Bowl Subdivision school during the 2011-12 academic year fell $3,285 short of actual expenses. Many students consequently end up living below the poverty line. Coaches, meanwhile, can earn millions in earnings and bonuses each year, noted NBC News.

"Our study shows that players with degrees will spend the majority of their lives making up for the value that the NCAA took from them during four years as a college athlete," NCPA President Ramogi Huma said in the report, noting that the value of players' educations decline even more when they make the move to professional leagues before earning their degrees. "Many won't come close to making up for the difference."

NBC News reported that the NCPA is leading an effort to unionize football players at Northwestern University, a shift that would classify players as employees, opening them up for compensation. Northwestern's football team is expected to vote on the measure on April 25. The NCAA and Northwestern have both vowed to fight any effort to change the status of college athletes to employees and allow them to earn a direct salary, as players can get compensated via scholarships. According to The Washington Post, some critics also believe the potential bidding war for high school athletes would make fielding sports teams too expensive for some programs, forcing them to throw in the metaphorical towel.

NBC Sports suggested that the NCPA study may be biased, since the organization strongly supports efforts to pay college players and has not been forthcoming with its methodology. The publication stated that such estimates are necessary in the course of debate, as the current system's labeling of college athletes as amateurs prevents an open market from sorting it all out.