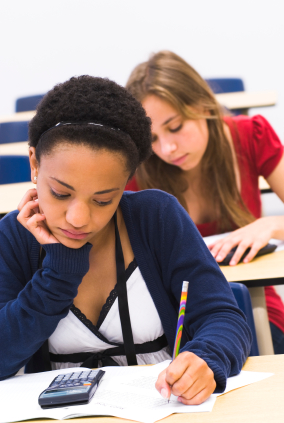 As the number of high school students taking and failing Advanced Placement tests increases, parents and schools faced with footing the bill are beginning to wonder the price is worth it.

The Bakersfield Californian reports that the high cost of the AP tests--at $86 per exam--is taking a toll on parents, students, teachers, schools and even California school districts. Low-income families who qualify for fee waivers can have the state pay $51 of the fee, but schools must submit the money up front. Now schools are discovering that state budget cuts are hindering reimbursement for the exams.

"That takes a hit on the budget," explained Diane Fletcher, who works as the supervisor of research of planning at the Kern High School District. She told the Bakersfield Californian that schools are currently owed more than $50,000.

"We have to sit and wait for a reimbursement," she said. "It's a little scary."

The San Diego News Network reports that according to the College Board, an estimated 1.7 million high school students now participate in the AP program, which would equal just under $150 million in revenue. That estimate is probably a modest one; USA Today recently reported that 2.9 million AP exams were taken last year. Yet the College Board, which administers the tests, declined to elaborate on the exact amount the AP exams earned.

"As a matter of longstanding policy, we don't disclose revenue from individual tests, programs or services," said Jennifer Topiel, executive director of communications for the College Board, in an e-mail published by SDNN. But she did say that any revenue earned was "all reinvested in our programs and services."

Topiel stressed that the AP "is one of the most expensive testing programs in the world to operate," and that it was costly to hire thousands of professors and teachers to grade the exam. She also said that exam fees pay for the annual development of each AP exam, the shipping of exam materials, and teacher development opportunities.

But clearly some schools have had enough. The East Hampton Press in New York reports that the East Hampton School Board is considering requiring students to pay for their own AP exams, especially because most students' AP scores are low. Currently, the district generously foots the cost for the tests and for college prep courses, costing taxpayers $110,000 a year.

But others say that despite their high cost, the AP exams are worthwhile. Katie White, who will soon be paying more than $250 for her son to take three AP tests at Bakersfield High School, told the Bakersfield Californian that she regards the courses as preparation for college. As such, she said she would prefer to pay now instead of paying for college classes later.

"In that respect," she told the Bakerfield Californian, "they're worth it."