Fast-Food Workers Across U.S. Plan to Walk Out on Thursday 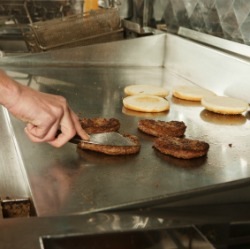 In an organized effort to try to increase hourly wages, fast-food workers in 100 cities across the U.S. have planned to walk off the job in a one-day strike on Thursday.

The New York Times reported that the movement is part of a growing union-backed effort by low wage workers to address what groups say are inadequate wages. Low wage workers, such as those at fast-food chains like McDonald's and Wendy's as well as workers for federal contractors, typically earn a federal minimum wage of $7.25 an hour and are demanding an increase to $15 an hour.

Simon Rojas, who works at a McDonald's in South Central Los Angeles, told The New York Times that he struggles to make ends meet.

"It's very difficult to live off $8.07 an hour," he said. Rojas also noted that he usually works just 20 to 25 hours a week. Rojas had studied to be a pharmacy technician, but was unable to save the $100 needed to apply for a license.

According to The New York Times, the labor movement started in November 2012 and has quickly expanded since. In November of last year, some 200 fast-food workers from more than 20 restaurants in New York City engaged in a one-day strike, the first walkout in the history of the nation's fast-food industry. Time reported that since then thousands of workers in other cities followed suit, even workers in the Deep South, a region known to be union-averse. Organizers of Thursday's strike told Time that workers in Charleston, South Carolina, Providence, Rhode Island and Pittsburgh, Pennsylvania will be among some of the newcomers to the movement.

The movement has gained widespread media attention over the year and has added to the debate on the nation's widening economic inequality, particularly at the beginning of the Christmas shopping season known as Black Friday. Yet, despite the increased pressure to increase wages, representatives of fast-food restaurant owners say they cannot afford to pay workers more because of price competition, according to The Washington Post.

If things are left unchanged, the battle is likely to continue. As The Washington Post pointed out, Bureau of Labor Statistics data shows that seven of the 10 fastest-growing occupations over the next 10 years will be in jobs that are traditionally low wage. Furthermore, low wage workers are not the only ones affected -- a study funded by Fast Food Forward and released by researchers at the University of California Berkeley and the University of Illinois found that taxpayers spend almost $7 billion a year on programs, such as food stamps and Medicaid, that supplement wages of fast-food employees.

According to Time, the walkouts have had minimum success. Workers in some areas have seen wage increases, but only in the range of 25 to 50 cents an hour and some workers who were fired for walking out have gotten their jobs back after community pressure and criticism.

The walkouts have, however, grabbed the attention of politicians, including President Obama who is now backing Democratic legislation to increase the federal minimum wage to $10.10 an hour, up from his previous call for an increase to $9 during his State of the Union speech.

Career and Education News
Home >
News>
Fast-Food Workers Across U.S. Plan to Walk Out on Thursday