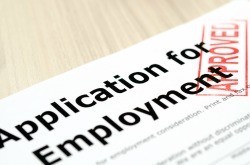 The U.S. economy rebounded slightly in February, after sluggish gains in the past two months.

As reported by The Wall Street Journal, the Labor Department's February jobs report showed that U.S. employers added 175,000 jobs last month. Economists had predicted an increase of 152,000. While the figure is better than predicted and a significant increase over previous months, The Wall Street Journal noted that it is still less than the 189,000 average monthly gains over the 12 months ended January. Figures for January and February were also revised upwards -- employers added 129,000 jobs in January, revised from 113,000, and 84,000 in December, up from the 75,000 that was previously reported.

The national unemployment rate ticked up to 6.7 percent last month, from 6.6 percent in January. According to MarketWatch, that is the first time the unemployment rate has increased in 14 months. The Wall Street Journal reported that the increase is due to more people joining the workforce as well as more people becoming unemployed -- 264,000 people joined the workforce last month, but that was offset by 223,000 newly unemployed people. The labor force participation rate remained unchanged at 63 percent.

In February, the professional and business service sector led the way by adding 79,000 jobs. MarketWatch noted that this sector -- which includes engineers, executives, lawyers and the like -- has grown the fastest since the end of the Great Recession in mid-2009. According to The Wall Street Journal, the leisure and hospitality sector added 25,000 jobs. Construction, a sector that is sensitive to the recent wintry weather, added 15,000 jobs last month, while manufacturing added 6,000 jobs. The health care sector also added 9,500 jobs in February, but that is the third straight month that the industry remained flat. Temporary employment, often viewed as an indicator that companies will begin adding permanent positions, grew by 24,000.

Reactions towards Friday's jobs report were mixed. Some economists remained optimistic, arguing that the dip in numbers is the result of the harsh weather and that hiring would pick up with spring just around the corner. Indeed, according to The New York Times, the Labor Department's report also showed that some 601,000 people were unable to work last month because of bad weather. That is nearly double the number who said that in February on a historical basis. Some economists have said that the data for March and April should help paint a clearer picture of how the economy is doing.

Others, however, are more skeptical. USA Today reported that Patrick O'Keefe, former deputy assistant secretary at Labor, argued that other factors, such as a slowdown in the housing recovery and weak consumer spending reports, suggest that the job market is softening.

Other indictors contributed to the debate. For instance, the average workweek fell to 34.2 hours from 34.3 hours, while average hourly earnings rose nine cents, to $24.31. The New York Times also pointed out that other surveys reported mixed signals -- a private survey conducted by ADP showed healthier job growth, while the Institute for Supply Management's nonmanufacturing survey showed weakness.

Despite the contradicting data, most experts say that the Fed will continue scaling back its bond-buying program. According to The Wall Street Journal, the central bank has scaled back its bond purchases to $65 billion per month. Policy makers signaled that the Fed will scale down to $10 billion increments, provided the economy continues to show signs of improvement.

In a note to clients that was quoted by The Wall Street Journal, Pantheon Macroeconomics chief economist Ian Shepherdson said that Friday's jobs report was "good enough to keep the Fed tapering."