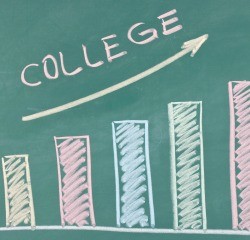 Two recently-released College Board reports, "Trends in College Pricing" and "Trends in Student Aid," revealed that while tuition is rising at lower rates, financial aid awards are still not enough to keep up with tuition growth, The Chronicle of Higher Education reported.

During the recession, tuition increased dramatically at four-year public institutions to compensate for lower state funds. However, the latest increase, for the 2013-14 academic year, was only 2.9 percent -- the smallest growth in 30 years. Private universities, on the other hand, experienced a 3.8 tuition increase.

Inside Higher Ed noted that during periods of modest tuition growth, federal aid made up for the extra costs and even lowered the net price of college for many families. In 2007-8, students at four-year, nonprofit private schools saw their net tuition, adjusted for inflation, decline for four years in a row, despite a 17.7 percent increase in sticker price. In 2009-10, federal spending helped decrease the net cost of four-year public universities, despite major state funding cuts.

The increased federal funding saw a reversal during times of economic recovery. It decreased by 9 percent in 2011-12 and then by an additional 1 percent during the 2012-13 academic year. Sandy Baum, senior fellow at the Urban Institute and co-author of the College Board's report, commented on this trend: "The federal government is not going to continue to cushion the growth in tuition. We have no reason to believe that the federal government is going to stop helping students, but everyone would be surprised if they decided next year to increase aid dramatically again."

Forbes expanded on the financial aid issue, stating that federal aid declined from $52 billion to $47 billion between the 2010-11 and current academic years. With lower federal aid comes more private sector loans, which rose from $6.3 billion in the 2010 academic year to $7.2 billion this year. Sallie Mae, the largest firm in the private student loan market, noted an 11 percent increase in third-quarter loan originations from last year. The firm predicted in its annual report that as "[t]he cost of education continues to increase at a pace that exceeds income and savings growth and the availability of federal funds does not significantly increase, we expect more students and families to borrow privately."

Declining aid has increased not just the amount of private loans but also the net cost of college for students, Forbes explained. Between the 2009-10 and 2013-14 academic years, the average net price of college jumped from $1,940 to $3,120, adjusted for inflation, for in-state students at four-year public universities. Numbers are even higher for out-of-state students, who saw a 3.1 percent tuition increase over the last academic year. The price of a college education has risen so much, in fact, that 60 percent of millennials believe that they would have been better off starting their career rather than attending college and paying tuition, according to a 2013 Wells Fargo study.

Higher education costs often translate into higher debt. According to the College Board study, 60 percent of students who graduated with a bachelor's degree in 2012 graduated with debt. The average debt for students who took out loans amounted to $26,500.

Federal aid is essential to making college affordable to students and families. As College Board President David Coleman told Forbes, "A college education is an unparalleled investment, but there is no college opportunity without college affordability."