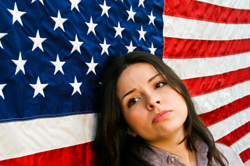 In an effort to crackdown on businesses that hire illegal immigrants, the federal government will be auditing the employment records of another 1,000 companies.

According to Bloomberg, more than 3,580 companies have already been examined since January 2009. Kelly Nantel, a spokeswoman for Immigration and Customs Enforcement (ICE), would not identify the additional 1,000 companies, but said that ICE targets companies based on tips.

"The inspections touch on employers of all sizes and in every state in the nation," she said in an email to Bloomberg.

The Wall Street Journal reported that agriculture, food-processing and hospitality industries have traditionally been targeted as they depend heavily on low-skilled workers, who are often undocumented. Last year, Chipotle Mexican Grill Inc. was forced to let go hundreds of illegal workers in Minnesota. Other companies that we hit included Abercrombie & Fitch Co., American Apparel Inc. and Gebbers Farms. The upcoming investigation is said to be the biggest since 2009.

Federal agents will be visiting the next round of companies in coming days to audit I-9 forms, which are used to verify an employee's identity and eligibility to work in the United States. Unlike the Bush administration's workplace raids, President Obama's investigations will focus more on holding companies accountable, noted Bloomberg.

According to The Wall Street Journal, state and federal lawmakers are also advocating that all U.S. companies use a government-run electronic database, called E-Verify, to confirm that all new hires are legal workers. With E-Verify, companies can screen new hires' I-9 forms against Social Security Administration, State Department and Homeland Security databases. Currently, use of the program is voluntary, with primarily federal contractors and just three states mandated to use it.

The Washington Post reported that use of the program has stirred up much debate. While supporters argued that it would easily reduce the number of illegal workers and, therefore, create job opportunities for the many legal workers that have been unemployed for months, critics have said that it would diminish the agricultural economy--which depends on undocumented workers--and would jeopardize millions of jobs that are held by Americans.

"Simply put, any E-Verify expansion that comes without meaningful immigration reform would be disastrous for the American agricultural economy," said Craig J. Regelbrugge, vice president of the American Nursery & Landscape Association, who was quoted by The Washington Post. "It will leave the United States importing food and exporting jobs."

Rep. Lamar Smith (R-Tex.) disagreed. "...If farmers really need foreign labor, they can get it legally--we have a guest worker program for agricultural workers that has no numerical limit," he said.

According to The Wall Street Journal, lawmakers are trying to mandate the E-Verify program in Tennessee, Florida and Georgia, as well as several other states, to cut down on the number of illegal hires.