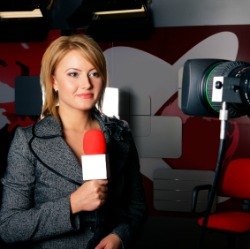 A recent study released by the International News Safety Institute revealed some troubling news for women in journalism. The study, which surveyed 875 female journalists from around the globe in order to examine harassment and violence toward female media workers, showed that almost two-thirds of female journalists had experienced some type intimidation, threats, or abuse in relation to their work. Surprisingly, the bulk of workplace harassment wasn't the result of the on-the-scenes reporting or work in other hostile environments. The report concluded that the majority of threats toward female journalists occurred in the workplace and were often initiated by male bosses, co-workers, and supervisors.

"When we talk about safety for the media, we often think in terms of staying safe in war zones, civil unrest and environmental disasters, but how often do we think of the office as a hostile environment?" said Hannah Storm, Director of the International News Safety Institute, in a press release.

According to the study, the most common forms of abuse were abuse of power or authority, verbal, written, and/or physical intimidation including personal threats, and attempts or threats to damage reputation or honor. And since women feared retaliation, addition threats, or worse, these incidents often went unreported and unresolved.

Other reported harassment was racial. According to the report, 89 of the 563 women who responded when asked if they had experienced racial harassment in relation to their work answered yes. Even more disappointing is the fact that over 51 percent of positive respondents reported that the racial harassment they had encountered occurred in the workplace, not in the field.

In a world where female journalists are sometimes required to visit volatile regions to get the story, it's troubling that so many incidents of threats, abuse, and harassment take place at work where women should be safe. In order to provide more insight into these issues, the INSI plans to release an in-depth analysis of this problem, which will include case studies and examples, to coincide with International Women's Day in March 2014.

In the meantime, the survey results serve as a painful reminder that there is still much to be done to protect women's rights in the workplace, or wherever they may be.

"What this ground-breaking survey shows is that women journalists are often at risk in their own work places as well: targeted by their colleagues, and because they are let down by the very people they should be able to trust, the violence and harassment they face goes widely unreported and therefore unpunished," said Storm.