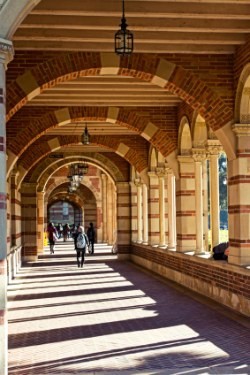 Despite the growing number of high school graduates in California, fewer grads are enrolling in the state's public colleges and universities, reported the Los Angeles Times.

A report released Wednesday by the Public Policy Institute of California (PPIC) revealed that over the past five years, fewer in-state high school graduates have enrolled in local colleges. According to a PPIC press release, enrollment at the University of California and California State University systems has dropped by one-fifth between 2007 and 2010, when enrollment rates were 22 percent and less than 18 percent respectively.

Furthermore, what may be more alarming is the fact that the decline in enrollment is not due to lower applicant qualifications. Among college-ready high school graduates--defined as those who have completed all the required courses for admission--enrollment fell from approximately 67 percent to 55 percent. And the number of college-ready grads is at historically high levels for every ethnic group in California.

"Sizeable numbers of high school graduates are less likely to enroll in a California university than they were just a few years ago," said Hans Johnson, author of the report and Bren policy fellow at PPIC, in the press release. "This is precisely the wrong direction California should be headed to meet the future demand for highly educated workers."

The drop in enrollment is tied to the drop in state funding for California's public colleges and universities. According to the Los Angeles Times, state funding is a whopping $1.6 billion less than it was a decade ago. In fact, the press release noted that California now spends more on corrections than it does on public higher education--over the last 10 years, fund spending for public universities fell 9 percent while it increased 26 percent for corrections. As a result, UC, CSU and community colleges have significantly raised tuition, cut courses, limited enrollment and become more selective. Once a model for other states and countries, California's higher education system and its restrictions now prevent many residents from pursuing a degree.

"These enrollment restrictions end up in practice denying a place at the table," Johnson told the Los Angeles Times.

However, these numbers do not only affect the students; it has a significant impact on the state as well. According to the San Jose Mercury News, for every 10 applicants who reject admissions offers from CSU, one ends up not going to college at all. Additionally, more and more students who do not accept an in-state offer move on to out-of-state institutions.

"It seems pretty clear that if you go to college somewhere else, you're likely to end up somewhere outside of California (after college)," said Johnson to the San Jose Mercury News. "It's bad to increasingly lose students to other states."

California Community Colleges Chancellor Jack Scott also told the Los Angeles Times that more transfer students are seeking educational opportunities outside of the state. Out-of-state transfers have increased 36 percent between the 2007-08 and the 2010-11 academic years.

Although the press release noted that the report offered some suggestions for policymakers, Chancellor Scott said the solution is clear: "We have two choices: Reverse this trend by restoring access and affordability to higher education, or suffer the economic consequences of failing to educate the workforce that this state's economy demands," he said in the Los Angeles Times.