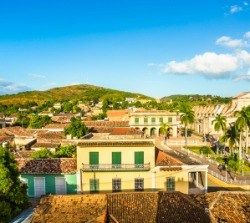 Due to past restrictions imposed on educational and cultural exchanges with the island of Cuba, a floating university dubbed the "Semester at Sea" was prohibited from stopping in Cuba for the last nine years. However, as the Latin American Herald Tribune reported, the current presidential administration recently made it possible for the ship and its 568 American college students to dock in Cuba once again. While on the island, students are expected to explore the history and culture of the area while studying its political system and past conflicts with the United States.

During their visit, students are also expected to partake in cultural and sports activities, including baseball games and university visits. And if past trips are any indication, they may also have a chance to experience what typical Cuban nightlife is like. During the ten stops the Semester at Sea cruise made in Cuba from 1999-2004, students spent time doing what many young folks on the Caribbean island do for fun - soaking in the culture, smoking Cuban cigars, and dancing to salsa music.

The Semester at Sea cruise provides students with the opportunity to experience college life aboard a 590-foot MV Explorer while docking in as many as 15 countries along the way. The program takes place throughout the year, with two four-month cruises in the spring and fall in addition to two two-month cruises during summer. The most recent voyage exposed students to the cultures and landscapes of three continents, with stops in Argentina, Brazil, England, Ghana, Russia, South Africa, and Spain. According to NBC News, more than 55,000 students have participated in the program since 1963.

Although Cuba wasn't originally on the itinerary, school administrators made a special exception after the Institute of Shipboard Education of the University of Virginia received special permission from the U.S. Treasury Department.

"It's a unique opportunity for the students to see the country and interact with locals," said Lauren Judge, the Institute's director of public affairs to NBC News. "This is also our 50th anniversary voyage, so it's a milestone for the program."

Many involved with the program believe that it's a positive step forward for American and Cuban relations. The new perspective gained by Americans and the Cubans who interact with them could lead to improved dialogue between citizens of both countries, says Tom Popper, president of Insight Cuba, a leading provider of people-to-people travel to Cuba.

"It's an incredible experience for Americans to travel to a country that maybe they've only read about, and the opportunity for Cubans to meet Americans is uplifting for them," said Popper to NBC News.

And since college-aged students weren't around during the most recent conflicts between the two countries, they may not have a full understanding of them. And according to Popper, that may prove to be a good thing.