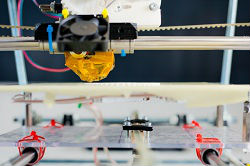 Six-year-old Alex Pring was born without an arm, and while he has always worked to keep up with other children, he told The Sun-Sentinel it is getting harder the more he grows. Prosthetic arms are expensive -- about $40,000 each -- and are rarely covered by insurance because they are quickly outgrown. This left the Pring family with few options -- at least until a group of Florida college students intervened. Using a 3D printer and $350 in common parts, the team designed a "bionic" arm for Alex, and then promptly posted their plans online for free.

It all started when University of Central Florida aerospace engineering Ph.D. student and Fulbright Scholar Albert Manero, who met the Pring family through an online volunteer network called e-NABLE. e-NABLE describes itself as an international group of engineers, tinkerers, occupational therapists, 3D print enthusiasts and others who "just want to make a difference." They design prosthetic hands for children, and then share their plans at no cost. UCF Today reports that e-NABLE had no plans for an arm that extended above the elbow, which is what Alex would need. That did not deter Manero.

Manero and a team of friends -- mostly electrical, civil and mechanical engineering students -- joined together to find a solution. That is when UCF aerospace engineering undergraduate Mateo Alvarez came up with the idea of using the energy generated by muscle movement in the boy's arm to trigger the arm chamber necessary to open and close the hand. A few weeks later, the team had a large working prototype, which eventually lead to a smaller, lighter prototype.

Alex and his family then reported to UCF's engineering machine shop to test the new prosthetic, according to UCF Today. At his second fitting, Alex learned how to use his muscles to open and close his hand. He celebrated with an embrace.

"The first thing he did when he could actually control it a little bit was hug his mother. He said it was their first real hug," Manero told UFC Today. "There wasn't a dry eye in the room."

Alex's mom, Alyson, choked up at the memory. Other children had long picked on Alex for his disability, and Alyson told the Sun-Sentinel she hopes the device will help rebuild her son's confidence. "It's important to us that Alex knows he is perfectly made and that he can do anything he wants," she said.

Manero told UFC Today that the team will continue to look for new ways to improve the arm, and have already been contacted by another family in need. In an interview with The Sun-Sentinel, he said the group intends to help anyone they can, and at minimal cost. "Our team feels you should not be profiting off of giving children arms," he added.

As Alex grows, the team can simply print him a new, larger arm using roughly $20 in materials, but Alex's goals are more short-term. He told The Sun-Sentinel that he just wants to put his arm to good use climbing things and fishing with his father. His message to others: "Everyone is born different. Everyone is special for what they do."