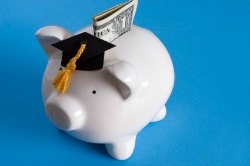 According to The Palm Beach Post, degrees at Florida's state colleges currently average $13,264, even after recent tuition hikes. With the proposal by Gov. Scott, Floridians could earn their bachelor's degrees for thousands less.

"You should be able to work and go to school and not end up with debt," Gov. Scott told WFLA TV as reported by Florida Today. "If these degrees cost so much money, tuition is so high, that's not going to happen. I have put out this challenge to our state colleges -- we have 28 great state colleges -- and say, 'Can you come up with degrees where individuals can get jobs that the total degree costs $10,000?'"

The Orlando Sentinel reported that by the end of the day, seven colleges had accepted the governor's challenge, including Valencia College, Seminole State College, Daytona State College and Broward College. Leaders at several other colleges also agreed to comply, expressing "enthusiasm" at the proposal. These included schools such as Brevard Community College, College of Central Florida, Santa Fe College in Gainesville and St. Petersburg College. In a statement released Monday, BCC President Jim Richey called the initiative a "perfect fit," reported Florida Today.

The Palm Beach Post reported that Scott's challenge follows his recent criticism of lawmakers and university presidents for raising the cost of higher education in Florida, much of which was directed at the state university system. The latest round of tuition increases at Florida's 11 public universities ranged from 9 to 15 percent. School administrators defended the hikes, arguing it was necessary in order to make up for $300 million in budget cuts that Gov. Scott signed into law this year. According to Florida Today, it does not look like Scott will offer any new funding to colleges to help cover the cost of the initiative.

Some college officials have not embraced the challenge. According to the Orlando Sentinel, State Board of Education member Roberto Martinez characterized Scott's plan as "a gimmick" that will "be used as a sound bite." The Orlando Sentinel also noted that other college officials said the state legislature would most likely need to approve changes in state law to permit the lower tuition for college students.

Florida Today reported this isn't the first time Scott has talked about the $10,000 degree program. A blue ribbon task force set up by Scott to study the state university system recommended a similar goal for Florida's 12 universities.