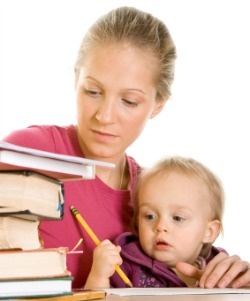 A Florida State College at Jacksonville sophomore who was enrolled in a virtual class took her baby with her to an on-campus final exam earlier this month and was turned away. The proctor informed Rebecca Mabrey she couldn't have her 10-month-old girl with her during the test, KSN reported. Mabrey reportedly showed the proctor a copy of the state's maternal and infant health care law on breastfeeding, but to no avail. The statute states, in part, that a mother may breastfeed her baby in any location, public or private, where the mother is otherwise authorized to be.

"My exam was between her nap time and feeding time. My intentions were to let her sleep through my exam and right at the end, she would wake up and want to breastfeed," said Mabrey, whose husband wasn't available to watch their child at the time.

This week the U.S. Education Department reminded colleges they have legal responsibilities to support pregnant and parenting students, according to Inside Higher Ed. In light of this, does Mabrey have any recourse against her school? The college, in an e-mail sent to Mabrey, wrote that children under 16 aren't allowed in "instructional areas," including the testing center, to protect minors and maintain ideal areas for learning. Florida State runs a child care center on each of its campuses as well, according to Inside Higher Ed.

"I think the college goes out of the way to accommodate students that have learning disabilities, handicaps, and have a wide array of situations where special accommodations are needed but not for breastfeeding mothers," she added.

Mabrey said she believes the school violated the Florida statute, but Florida State College disagreed, saying the student wasn't there to breastfeed and they hadn't prohibited her from doing that, The Jane Dough noted.

Whether the Education Department's Office for Civil Rights recently released guidelines, in the form of its "Dear Colleague" letter and pamphlet, apply in Mabrey's case isn't clear, said Ada Meloy, general counsel at the American Council on Education, Inside Higher Ed indicated.

"It does not appear that the Dear Colleague letter issued yesterday would be controlling in the situation," Meloy added, as reported in Inside Higher Ed.

The letter does not address breastfeeding mothers, but does address the topic of pregnant women and parents. It says that any accommodations provided to students with medical conditions must be provided to pregnant women. As well, it also encourages schools to allow excused absences for parents, female or male, who need to take a child to a doctor's appointment or take care of a child because of illness.

Lisa Maatz, director of public policy and government relations at the American Association of University Women, said Mabrey's situation "does very much play to the guidance, and the letter should cause Florida State to reconsider its policy."

"If a school is willing to make appropriate accommodations so that, say, a dyslexic student has questions read to them or a student with some other difficulty has an extra hour of time because of the time it takes them to write things out, the accommodations that are made there seem very similar to the accommodations that could have been made in this situation," Maatz said. "I certainly think she has some hay to make here."

Mabrey was allowed to reschedule her exam.