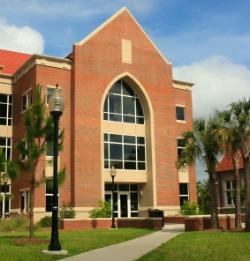 Last year Florida Governor Rick Scott challenged state community colleges -- called Florida State Colleges -- to create bachelor's degree programs with a total price tag of $10,000. Such a program would shave about $3,000 off the normal cost of tuition and fees at these state colleges, and cost less than half what the state's four-year public universities typically charge. This plan to help mitigate college costs and create jobs was met with both applause and skepticism, though only time could tell whether the plan was plausible. Now, nearly one year later, progress is off to a sluggish start.

Nearly two-dozen of the Florida College System schools offering baccalaureate degrees have signed on to Scott's $10,000 degree pledge, reports NPR's State Impact, but only 10 were ready to enroll students this fall. Those who have launched their programs only offer one or two majors with that price tag, and each can choose how that discount is applied. St. Petersburg College will charge $10,000 in tuition alone, but the discount does not include books, meals or housing. Other schools, like Broward College, set the total price of earning a degree at $10,000, but will not apply savings until late in the game: The first three years of school will cost $10,000 while the fourth year is essentially free.

Sun Sentinel reports there are other problems slowing down the pledge's implementation, one of which is that nobody is really signing up. When Broward College opened its program last month, it offered students a total of 80 slots. Today, all 80 remain unfilled.

"We've gotten some interest. We haven't gotten any applications," Linda Howdyshell, Broward College's provost, told the Sun Sentinel. "We just started getting the word out.''

Randy Hanna, the state college system's chancellor, told the Sun Sentinel that it is too soon to label the program a failure or success. He said he was pleased that so many schools agreed to create at least one $10,000 degree, but that it would take time to implement them. "You have to have time to structure programs that meet the needs of students and the local workforce," Hanna said.

Scott is not the first to propose rolling out four-year degrees at this price point: Texas Governor Rick Perry also challenged his state's colleges to create $10,000 bachelor's degrees last year, and according to The Washington Post, higher education writer and researcher Anya Kamenetz recently published a report through the Third Way outlining how colleges might be able to truly and effectively address the problem of college affordability. Kamenetz is skeptical of the plans in Florida and Texas, however, calling them "pretty gimmicky and unrealistic."

"They rely on dual enrollment and acceleration, and they are limited to small regional campuses," Kamenetz told The Washington Post. "They are unlikely to make a big impact."

Instead, Kamenetz proposes broad spending reform that might help a college offset the cost of affordable degrees. She said she would cut administrative costs and perks like subsidized dorms or on-campus recreation centers, and would integrate more online courses into such programs.