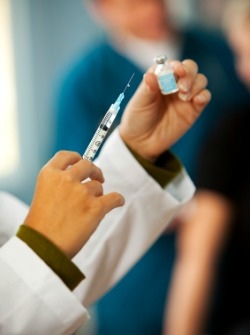 Despite the tendency of the flu to spread rapidly on college campuses, many students don't obtain the vaccine and can jeopardize their health and that of those around them.

People under the age of 30 comprised nearly 80 percent of the confirmed H1N1 flu cases in the U.S. in 2009, according to a press release. This sparked an emergency Centers for Disease Control and Prevention (CDC) campaign targeting college-aged students that resulted in many schools offering free flu vaccinations. Additionally, a separate press release indicated that the U.S. Department of Health and Human Services launched a public service announcement campaign urging students and others to obtain a flu shot.

Following the CDC campaign, 34.2 percent of pregnant women and health care workers obtained the flu shot, but just 10 percent of college students did, according to Health Canal. This was a concern because the flu can quickly spread on college campuses due to the large number of students living closely to one another.

Janet Yang, a researcher at the University of Buffalo, conducted a study to determine why the majority of college students weren't getting the flu vaccine. Her findings, published as "Too Scared or Too Capable? Why Do College Students Stay Away from the H1N1 Vaccine?" in the October issue of Risk Analysis showed that students thought they knew more about the flu and vaccine than they actually did.

"Many students surveyed were confident that they had all the information they needed to make an informed decision about being vaccinated," Yang explained in Health Canal. "In fact, however, they often did not have even minimal baseline knowledge of the flu itself or of the vaccine that prevented it."

Survey respondents seemed to rely heavily on questionable sources for their information. According to Health Canal, a YouTube video circulating at the time focused on the risks of obtaining the vaccine but not on the risks associated with having the flu. Oftentimes, students didn't understand how the vaccine related to their own health and that of people in close contact. Other students, however, deemed their source for flu vaccine information to be credible and looked for additional data, which bolstered their decision to get vaccinated.

"The study demonstrated how the perception of risk associated with vaccination could influence individuals' information-seeking behavior and intention to be vaccinated," Yang said in Health Canal.

The flu is a serious illness that can temporarily debilitate people with breathing problems, weakness, fever, body aches, vomiting and diarrhea. As reported in the press release, according to the CDC, more than 200,000 Americans are hospitalized as a result each year. Individuals with chronic conditions, such as asthma and diabetes, are especially at risk of developing fatal complications.

The press release noted that the flu vaccine is delivered via injection or nasal spray. Potential side effects can be tenderness or redness in the spot where the shot was administered. The vaccine is available for free or at a low cost at numerous locations nationwide, including college and community health centers, pharmacies, workplaces and even some retailers like Costco.

"Flu Season Has Begun, but Most College Students Ignore the Vaccine," healthcanal.com, September 27, 2012