For Most Managers, There Is No Such Thing As 9-To-5 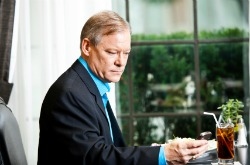 A new study released by Forbes Insights and the company Gyro shows that the lines between work and personal life are blurring, especially when it comes to checking e-mail and messages during out-of-the-office hours.

Some 63 percent of study respondents indicated they check their e-mail every one to two hours when outside normal office hours, according to Forbes. Another 12 percent indicated they checked their work e-mail when out-of-the-office five times on an hourly basis.

"There's no more off switch," said Tom Nightingale, president of sales and marketing for ModusLink Global Solutions, in Forbes. "There are very few people who are not checking e-mails or receiving social media while at work, school, community or at the sidelines of their kids' sporting events."

Indeed, some 52 percent of respondents indicated they received information related to the job non-stop, according to Forbes. Another 53 percent said they have dealt with business issues "routinely" during a family gathering or meal time. This could be a sign that the nature of work is changing, stated Christoph Becker, the CEO and chief creative officer of Gyro.

"Our research challenges the perception that people are unable to juggle busy working lives with personal time," Becker said in Media Daily News. "Nine-to-five thinking is a thing of the past and this must be reflected in how brands advertise with their customers and clients."

Nearly 550 business managers in Europe and the U.S. were interviewed in February for the survey. Some 98 percent said they regularly dealt with work issues outside of the office via e-mail, reported Media Daily News. However, on the other side, some 98 percent also said they handled some of their personal affairs while at work.

The survey also showed that 84 percent of respondents felt "empowered" and well-equipped to make business decisions due to the continual flow of work information. Only 15 percent indicated they had difficulties separating personal and work time.

"Decision-makers are blending work and personal time effectively to make better business decisions, free from the shackles of the ticking clock," Becker is quoted in a press release as saying. "This research offers our clients valuable insight on when, where and how they can influence the high-value decisions made by their customers."

Additionally, the study revealed some information about the decision-making process. Some 59 percent of respondents indicated they make decisions related to business at home while another 73 percent responded their decisions were well thought-out due to having more time to think, according to the press release.

"We all know technology has expanded our connection to work, but only now do we have research into the attitudes and habits of senior business people on how an always-on-world impacts business decisions," Bruce H. Roberts, chief insights officer for Forbes Media, is quoted in the release as saying.

Career and Education News
Home >
News>
For Most Managers, There Is No Such Thing As 9-To-5