F.B.I.: Students Studying Overseas Are Being Targeted for Espionage Activity 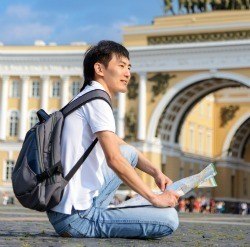 According to Ground Report, the Federal Bureau of Investigation (F.B.I.) has recently upped its efforts to educate students about the dangers of being targeted for espionage activity. At-risk students, noted the F.B.I., are often those who study overseas for extended periods of time.

In order to portray an example of how students are targeted, and the potential consequences, the F.B.I. released a 28-minute video documenting the story of Michigan resident Glenn Duffie Shriver. According to The New York Times, Mr. Shriver studied in Shanghai during college then returned to the city to look for work after graduation. He caught the eye of officials affiliated with the People's Republic of China government after he responded to an ad asking for someone to write a paper on U.S.-Chinese relations in exchange for $120. Officials then began a campaign to build a relationship with Shriver and convince him to apply for U.S. government jobs. When all was said and done, Shriver received a total of $70,000 for taking the U.S. Foreign Service Exam twice and applying to the Central Intelligence Agency.

Shriver was arrested before gaining employment with the U.S. government or getting access to any classified information. But he wasn't off the hook. In fact, The New York Times reported that Shriver pleaded guilty to "conspiring to provide national defense information to intelligence officers of the People's Republic of China," a crime that would cost him four years in federal prison.

The F.B.I. short film, Game of Pawns: The Glenn Duffie Shriver Story, was created to show how innocent students could knowingly or unknowingly be pulled into an intelligence-gathering scheme, even if it's something they had never considered. According to the F.B.I.'s website, foreign intelligence offers often use sneaky tactics that catch overseas students off-guard. For example, they typically don't admit that they work for the government, and instead claim to work in another field.

They tend to nurture the relationship over time and might also reach out to them with job opportunities or internships, paid writing assignments, language exchanges, or other seemingly-legitimate reasons. At a certain point, they might start asking the student to perform small tasks in exchange for financial gain or other rewards. In the meantime, they continue to build a relationship until they feel comfortable enough to ask them for bigger favors, including applying for government jobs that can give them access to classified information.

The F.B.I. offers some general advice to avoid falling into these traps, including being wary of "money-for-nothing" schemes and offers that seem to be too good to be true. They also suggest being cautious when it comes to accepting favors, especially if they appear to involve government processes. In addition, to the F.B.I. tells students to be suspicious of anyone with questionable government or criminal affiliations and to guard their personal information.

But most importantly, Glenn Duffie Shriver points to "a keen awareness" as "the most powerful weapon [against being recruited]."