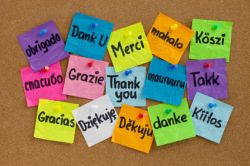 Enrollment in foreign language classes on college campuses nationwide has increased by 6.6 percent over the last three years, contributing to a decade-long trend of burgeoning language study, according to a new report released Wednesday by the Modern Language Association.

The survey, "Enrollments in Languages Other Than English in United States Institutions of Higher Education, Fall 2009," pooled data from more than 2,500 American colleges and universities, comparing foreign-language figures to the fall of 2006, The Chronicle of Higher Education reported.

While enrollment in popular language choices such as Spanish, French and German posted modest gains, American Sign Language, Korean, Chinese and Portuguese surpassed their traditional counterparts in enrollment. In addition, Arabic witnessed the largest spike--a 46 percent increase--outstripping Latin and Russian to become the eighth most-studied language. Since the fall of 2006, 35 more languages are being taught at American institutions of higher education.

Young Americans began showing a keen interest in Arabic shortly after the September 11 attacks in 2001,The Los Angeles Times reported. Since then, enrollment has tripled, according to MLA Executive Director Rosemary G. Feal.

"It's a response to what's going on in the world," she said, also noting that the same holds true for recent jumps in Chinese and Korean courses.

As of last year, 865,000 US college students took classes in Spanish, nearly four times as many as French and nine times the number in German. American Sign Language, which has become an increasingly popular way for students to satisfy their language requirements, was ranked fourth, followed by Italian, Japanese, Chinese, Arabic, Latin, Russian, Ancient Greek, Biblical Hebrew, Portuguese, Korean and Modern Hebrew.

Despite the steady rise in enrollment rates among college students, especially undergraduates and those at two-year institutions, foreign-language enrollment for graduate schools has declined 6.7 percent from 2006 to 2009, dropping for the first time in a decade.

MLA officials said this decline might portend a shortage of foreign-language teachers for the next generation of students, The Chronicle of Higher Education noted. Graduate enrollments may dip even further in light of recent budget cuts within foreign-language departments across the country.

"Opportunities to study languages may be threatened by program cuts," Feal said. "This is a vulnerable time for language study."

Feal added that boosting graduate enrollment will largely depend on the job market for language Ph.D.'s. She admitted that fewer graduate students are pursuing advanced foreign-language degrees because universities are granting tenure to fewer professors.

"Institutions are creating circumstances for languages not to thrive," she said.