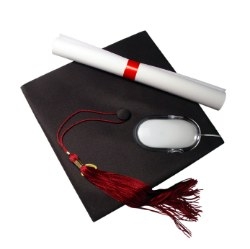 Ben Nelson, the 36-year-old former CEO of the Snapfish photo-sharing website and the Redbeacon home maintenance site, envisions his Minerva Project as a for-profit, undergraduate college that would rival Ivy League schools and attract students from around the world, he said.

"Harvard says that 80 to 85 percent of its applicants are fully qualified for admission, yet they have a 5.9 percent acceptance rate," Nelson said in Fast Company. "We think, conservatively, there are 250,000 English-fluent, smart, driven young people who aren't able to get into an Ivy League university or equivalent in their home countries, and if we capture 1 percent of that market, we'll be self-sustaining."

The Minerva Project would offer upper-level courses only, all online, taught by top-quality professors; students would be required to teach themselves, too.

"If you don't take Econ 101 on your own," Nelson said to Reuters, "you're going to flunk our economic policy class."

Nelson also would like students to live in dorms around the world, first locally and then moving to a new place -- Mumbai, Vancounver, Shenzen, Jordan, Brazil, Japan, France -- each semester. Room and board, including travel, would cost about $10,000 a year, he said. As for tuition, he hasn't set an amount yet but intends to charge less than $20,000 a year.

Students would be chosen through a rigorous two-step process: first examination of their academic credentials (grades, test scores, essays, etc.) and then, for those who qualify, interviews to determine their drive, analytical skills and goals, Inside Higher Ed noted.

Nelson has attracted some big names to his advisory board, such as Larry Summers, the former president of Harvard University and former U.S. Treasury Secretary.

At this point, the Minerva Project remains in the planning stage, Reuters indicated. Nelson hasn't announced contracts with professors, published a course catalog or sought accreditation for degree programs. A website, however, exists, where students may fill out an online form, but no formal application process is in place. Education experts warn no evidence exists to prove that the Minerva Project or similar online colleges will succeed academically.

"The only way we're going to find out what works is to do it, rather than sit there opining," said David Wiley, an associate professor of instructional psychology and technology at Brigham Young University, in Reuters. "Bring it on."