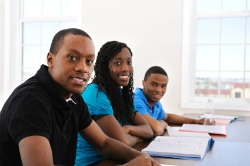 Maryland's higher public education system is undergoing intense scrutiny this week as a trial begins in Baltimore to examine allegations that a separate and unequal education has been provided to students at four of the state's historically-black colleges.

"The state of Maryland has systematically failed to desegregate these four schools," Attorney Jon Greenbaum, chief counsel for the plaintiffs, was quoted as saying in The Wall Street Journal. "Elements that trace back to the 1930s and '40s are still a part of the state's higher-education system."

The suit, filed in 2006, by a group of alumni and students of the schools, which include Bowie State University, Coppin State University, Morgan State University and the University of Maryland Eastern Shore, looks at whether the state spent enough money to make up for longstanding educational disparities, The Washington Post reported. Specifically, the lawsuit alleges that the Maryland Higher Education Commission violated a 1954 U.S. Supreme Court ruling that prohibits racial segregation in public schools by allotting more funding to white schools than black schools when the same types of programs were offered at both.

As a result, the suit seeks to eliminate duplicate programs at the schools as well as to provide more funding to the duplicate programs offered at black schools. It is the first ever to examine higher-education practices relating to desegregation in Maryland and the first to present in the U.S. since the mid 1990s when Alabama paid $160 million to a handful of historically-black colleges, The Wall Street Journal noted. However, this time, the damages being sought are significantly higher: plaintiffs are seeking $2 billion plus, according to The Chronicle of Higher Education. That amount is described as the difference between what the schools should have received from 1990 to 2009 and what they actually did, The Wall Street Journal reported.

According to The Chronicle, the issue of desegregation in Maryland has been longstanding. As far back as 1969, the U.S. Department of Education's Office for Civil Rights warned the state that its higher education system was segregated and in violation of federal law. In a 2000 agreement with the civil-rights office, the Commission made a five-year commitment to avoid duplicating any programs already available at its black schools. However, when that agreement expired, the plaintiffs came together to file the lawsuit now before the federal judge.

State officials are denying the charges and plan to show that the historically-black schools have received greater amounts of funding per full-time student than the traditionally white schools in the state, the Chronicle reported. The state is also expected to show that the duplicate programs created at some of its more white schools have not taken away students from the black colleges.

"Our office is tasked with defending the state, and has been arguing that the state has in fact worked hard to erase any vestiges of discrimination in its higher-education system," Douglas Gansler, the state's attorney general, said in a written statement that was quoted by The Chronicle.

The trial should last approximately six weeks. If the case is not settled by the end, the federal judge overseeing the case will decide the verdict, according to The Wall Street Journal.