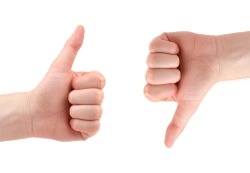 Have you ever wanted to dislike someone or something on Facebook? Now you can, with a new app on the network that lets you "Add Enemy" and even declare "Archenemies."

"It's social-media blasphemy, in that we're suggesting that you share differences you have with people and share things that you don't like instead of what you do like," Dean Terry, director of the emerging-media program at the University of Texas at Dallas, told The Chronicle of Higher Education. "I think social media needs some disruption. It needs its shot of Johnny Rotten."

Terry and Bradley Griffith, a graduate student, created the app "EnemyGraph" as a result. This Facebook plug-in also lets you highlight "Social Dissonance" with your friends and declare war on any person or group with a Facebook profile. The Enemies list appears on your profile and other app users can see it, too, reported RT. You also can see who or what tops the Enemy list. Trending enemies, for example, have included the Twilight Series by Stephenie Meyer, racism and tomatoes.

"We're using "enemy" in the same loose way that Facebook uses 'friends,'" Terry said in The Chronicle. "It really just means something you have an issue with."

Facebook is unlike the real world in which relationships are complex, he added. The functionality of the network is all positive and doesn't offer users a way to dislike ideas, products, people or organizations. Social networks should reflect society.

"People are also connected and motivated by things they dislike," Terry said.

"It's dangerous for us as a society to move in this direction where everything has its worst qualities removed from it," he told The Chronicle.

Several Facebook users want to be able to directly express discontent with things. More than 3 million voted for a "dislike" feature in an online petition on the platform. Terry would have preferred the use of "dislike" over "enemy," but Facebook bans the word to prevent anyone from creating a dislike button. Critics of Facebook say the social network's leaders want to keep it friendly for advertisers that would not appreciate users badmouthing their products on the site.

The Chronicle noted that Facebook officials declined to discuss this new app. However, concerning a "dislike" feature, a spokesperson said: "At some point we may consider it, but for the time being, we are working on what we believe are more high-impact features."

Will use of the app increase cyberbullying and its consequences? Terry said he doesn't think so.

To use EnemyGraph, you and your friends will have to search for and load it (it's free), according to Technolog on msnbc.com. It is available on Facebook at least for today.

"We give them a couple of weeks at best before they shut us down," Terry said.