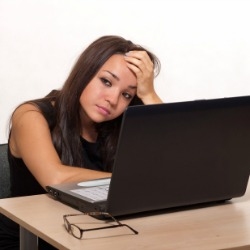 Research has shown that earning a college degree can lead to higher earnings over a lifetime, but can it help us land that dream job that makes us happy? According to a recent Gallup survey, it may not. Gallup polled more than 150,000 American adults from January through December 2012 and found that workers with a college degree were less likely than those with a high school diploma or less to be engaged at work.

Participants were asked to agree or disagree with a series of statements regarding workplace engagement and productivity. The strongest predictor of engagement was the statement, "at work I have the opportunity to do what I do best every day." Respondents who had earned a bachelor's degree, regardless of age, reported being 28.3 percent engaged at work, whereas 32.7 percent of those with a high school diploma or less said they were engaged. The findings came as a suprise to many people.

"Given that what we all expect out of college is something better, you would think that college graduates are way more engaged in careers than everybody else," said Brandon Busteed, executive director of Gallup Education, in Inside Higher Ed. "This is not a statement about liberal arts, it's not a statement about community college, it's literally about higher education in general -- that there's something about the process and the experience that is preventing graduates from getting to a place where they're doing what they're best at."

Philip D. Gardner, director of Michigan State University's Collegiate Employment Research Institute, told Inside Higher Ed that the findings are significant. When it comes to engagement, most of the discussion is around workplace policies, culture and management -- what can employers do to keep workers happy? While those elements are indeed important, the findings suggest that a problem may also reside within higher education.

In The Gallup Blog, Busteed noted that Gallup researchers originally thought that pursuing more education resulted in higher expectations that were simply not met in the workplace. Data on postgraduate engagement, however, showed this was not the case -- postgraduates were slightly more engaged than those with a college degree, 30.1 percent versus 28.3 percent. This is perhaps due to the fact that graduate school is more focused, allowing students to pursue a particular passion or interest.

Busteed speculated two possibile explanations. The first was that students blindly followed an "achiever" path, pursuing societal expectations of success without ever seeking career advice from a college counselor or thinking about what they really wanted to do or what they were good at. In this case, students often end up following go-to careers paths such as law school, investment banking or consulting, noted Inside Higher Ed.

"I think we're kind of caught up in preconceived notions of what success should look like and it's landing a lot of college graduates in not the right place," Busteed said in Inside Higher Ed.

The second reason highlighted by Gallup was that graduates may get stuck in jobs that they are overqualified for because there are either too few jobs that require a college degree or there are too many degrees that are not aligned with the needs of the current job market.

Because workplace engagement is a key factor for economic growth, Gallup emphasized the importance of colleges helping students land a job in which they will feel engaged as well as employers creating engaging work environments. Inside Higher Ed noted that Gallup's report suggested colleges do more to prepare students by building better connections between campuses and workplaces as well as offering better mentorship for students still in school.

“Whatever we’re doing now in higher education, it needs to change. We need to be much more in tune with the fundamentals of helping each person figure out what they like to do and what they do best,” wrote Busteed in The Gallup Blog.

"College Path May Not Be Best," thegallupblog.gallup.com, July 18, 2013, Brandon Busteed