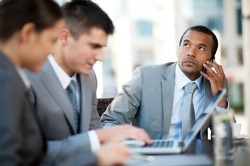 Americans still prefer to have a male boss, but not as much as much as before.

As The Huffington Post reported when Gallup first asked if people preferred to work for a man or a woman in 1953, 66 percent reported that they would rather have a male boss, compared to just five percent who preferred a woman. By 1975, those views remained somewhat unchanged, with 62 percent preferring a male and seven percent a female. But as UPI pointed out, by the 1980s preferences started to shift.

While many may assume that men would prefer to have a male boss and women a female boss, the survey revealed that preference was not that simple. According to Gallup, which conducted telephone interviews with a random sample of 1,008 U.S. adults, aged 18 and older, between August 11 and 14, one's current boss seems to have an influence--of the 56 percent who currently have a male boss, 38 percent said they would prefer to work for a male at a new job. Of the 30 percent who currently have a female boss, 28 percent would like to have a female boss at a new job.

Age was also a factor--in general, 31 percent of Americans younger than 50 would prefer a male boss, while 35 percent of those 50 and older would rather work for a male. The difference, however, was more prominent among older women--women younger than 50 were neutral in their preferences, while women 50 and older preferred a male boss to a female boss (44 percent vs. 18 percent).

Interestingly, Gallup noted that women were more likely than men to have some sort of preference. Overall, almost half (46 percent) reported having no difference in preference, but when broken down by gender, 57 percent of men were indifferent, compared to 34 percent of women. Still, both men and women reported that they would rather have a male boss--26 percent of men and 39 percent of women.

According to The Huffington Post, last month's Gallup poll is consistent with other surveys that were conducted in the past. Gallup concluded that preferences may continue to shift and become more equal as younger Americans age in the years ahead.