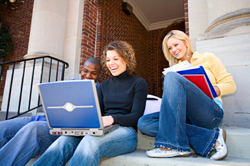 When it comes to President Obama's goal of having the most college graduates by 2020, colleges and universities are not only asking how can we get more students into college, but also how can we retain them once they are enrolled? For some, the answer is social networking.

The Bill and Melinda Gates Foundation has been looking for ways to improve retention, and therefore graduation rates, among college students. According to a press release, the foundation announced it would invest $2 million in Inigral, an educational technology company that created Schools App on Facebook's platform in 2009. This is the first time the Gates Foundation has made a direct equity investment in a for-profit company.

Inigral's education-focused social media app helps students integrate their social and academic lives. Some research has shown that this sense of friendship, belonging and engagement during the first year of college is one of the most important factors in whether a student comes back the following semester.

"Our Schools App can increase a student's sense of belonging and integration within an institution, lowering the chances of attrition," said Michael Staton, co-founder and CEO of Inigral.

As Mashable pointed out, the app turns Facebook back into the school community it once was when new users were required to have a school e-mail address to sign up. The cost of the app is dependent on the number of students at the particular institution, but ranges from $10,000 to $50,000 each year.

According to International Business Times, students can use the application to interact with clubs and campus organizations or to discuss admissions or other campus-related issues. NPR added that the app's school-based sites are only accessible by students. New students are added to the group the moment they are accepted to a school in order to create an immediate network of friends.

"What we do is make sure that when students arrive they either already have assembled or [can] very quickly assemble that kind of peer support," explained Staton.

While some believe it is still too early to measure the impact of Schools App, Kari Barlow, an online administrator at Arizona State University, told NPR that her school is already beginning to see some results.

"We have some indication that first-time freshmen who opted to participate in the application were highly more likely to be retained for the next semester," she said.

Some students, however, are skeptical. Alexis Thompson, a sophomore at Columbia College who uses the school's site, pointed out that the application is only successful if students want to work with it.

"[It's] something that they have to be proactive about," she said. "So, the Facebook app can be there. But unless you're being proactive and you want to go out and look for things like that--it's really on the student."