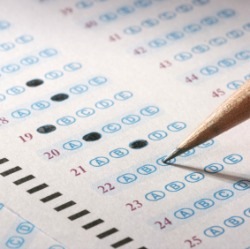 The General Educational Development (GED) test, which has served as the primary equivalent of a high school diploma for decades, will soon undergo significant revisions. These changes have raised some major concerns and opened the doors for test competitors.

GED Testing Service announced that the new test, which will be available on January 2, 2014, will include a career- and college-readiness component while still allowing test takers to earn a high school credential. According to Inside Higher Ed, other changes include making the test completely computer-based, which officials with GED Testing Service said is relevant for the demands of today’s workforce. The test will also be more aligned with the Common Core State Standards in an effort to assess college readiness. Lexch.com reported that students who have completed part of the GED will have to finish the remaining subjects by January or re-take all five subjects in the new format.

“In the past, the GED used to be a terminal degree,” said CT Turner, a spokesperson for the service to Inside Higher Ed. “Those days are gone.”

Some education experts argued that the change is overdue.

“It made sense to update the test,” said Anne Hyslop, a policy analyst with the New American Foundation, to Inside Higher Ed. Hyslop said the GED no longer accurately tests what many states expect from high school graduates.

Others, however, have raised concerns. For instance, education leaders and politicians in some states worry that eliminating paper-based methods could discourage many adults from taking the exam. Price is also an issue, as the new GED will cost $120, approximately twice the current fee. A large portion of those with the lowest income nationally take the GED, so doubling the test's fee could make it inaccessible to many who need to take it most.

As a result, Inside Higher Ed noted that many states have turned to or are looking at alternatives to the GED, a significant move considering the fact that the test is taken some 800,000 times every year. Three states, including New York, have already switched to tests from Educational Testing Service (ETS) and McGraw-Hill and many others are considering following suit.

“Once New York went with McGraw-Hill, that sort of broke the logjam,” said Art Ellison, state director of adult education in New Hampshire, a state that recently switched to HiSET offered by ETS.

Turner told Inside Higher Ed that GED Testing Service would do its best to work with states to ensure that people have access to the test and also warned that using other tests could further complicate things, such as college admissions and “portability” if a student transfers to a college in a different state, since the GED has been a standard requirement for so long. Officials from the states who have switched, however, said they are working to overcome those potential obstacles.

“The new assessment is a stepping-stone to a brighter future,” gedtestingservice.com