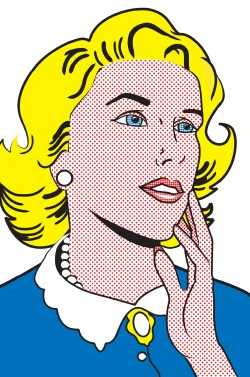 "They said it was really like a small town where everybody met, and we were all just this big family. It was really, really intimate for having such a large number of people." - Christina Blanch

Earlier this year, Christina Blanch, an adjunct professor at Ball State University, taught what turned out to be a very popular MOOC, titled "Gender Through Comic Books." The course's popularity offered insight into the success of MOOCs and the role of online courses in education.

According to the course page, students used comics as a medium to analyze gender identity, roles, and stereotypes. Real-time interviews, interactive video lectures, and online student discussions were all parts of the class. In January, Blanch told Wired that the class would have the chance to interview notable comic-book writers; including Mark Waid, Terry Moore, and Gail Simone; as well as Marvel editors Sana Amanat and Steve Wacker. As for reading material, Blanch mentioned that the class would read a range of works, from DC's Batman to smaller publishers' works, such as Saga and Strangers in Paradise.

In an interview with CityTownInfo, Blanch went on to speak about the diversity of reasons that people expressed interest in the class. While some wanted an environment to discuss comic books academically, others signed up out of interest for gender studies. Still others, she assumed, signed up for the interviews.

According to Blanch, "Gender Through Comic Books" was successful in several ways. For example, not only did the enrolled class of 3500 not suffer the typical 90 percent dropout rate for MOOCs, but those enrolled students were, in Blanch's words, "just the awesomest students." They asked for extra readings, requested a discussion board, and even protested when Blanch planned to stop giving quizzes.

The level of student involvement in Blanch's MOOC is not a norm for such classes. TIME stated that 20 percent of students who dropped out of a MOOC did so because they lost interest. Shana Jaggars, assistant director of the Community College Research Center at Columbia University's Teachers College, told TIME that many students who do remain enrolled don't do as well as they would in a traditional course because there's less engagement in online courses.

In "Gender Through Comic Books," however, students seemed to be as engaged as ever. As Blanch told CityTownInfo, the students "created this sense of community" - a community that lived beyond the course's end date. "The Facebook page is still extremely active," Blanch stated, "and I have more people every day asking to join. I meet students at every convention I go to. I keep in touch with students still on Twitter, through email, you know, Facebook." There's even a Washington D.C./Baltimore group of former students who still convene on a monthly basis.

Blanch attributed the course's success both to the students' enthusiasm and her own participation in the course. She explained that in some MOOCs, professors put the information up "and then just kind of let the students run it." Blanch, however, took a more active approach to teaching and built a "personal connection" with her students. She said that while people were worried about "feeling like a little bitty fish in an ocean" in such a large class, that's not how her students felt. "They said it was really like a small town where everybody met, and we were all just this big family. It was really, really intimate for having such a large number of people."

Despite high dropout rates, MOOCs and online education in general are gaining acceptance in academia. A Babson group study discussed by TIME revealed that 77 percent of academic leaders think that online education is as good or better than face-to-face education. Sixty-nine percent went so far as to say that online education is essential to their long-term strategy, although only 30 percent of these administrators' faculty agreed. MOOCs, specifically, are also gaining ground. According to an Enterasys study, 40 percent of academics surveyed reported that their school plans to offer MOOCs within the next three years. Legislators in many states are also trying to hasten a shift towards MOOCs for college credit in an effort to expand access to higher education while cutting costs at the same time.

Blanch believes, however, that there shouldn't be a question of either/or when discussing campus and online education - "you can have both, and they can both help each other." MOOCs in particular, she stated, "can do nothing but help higher education and help people understand that, you know, here's a place to continue your learning, or to supplement your learning."

Blanch compared MOOCs to gender stereotypes. "There are people that read things like, 'Why are women in comics? That's stupid. It's for men.' It's the same thing with education…MOOCs are wonderful, and I hope they don't go away. I hope people start to understand that they're not here to replace degree-seeking programs. They're just here to enhance the experiences and for lifelong learning. That's what I think of MOOCs as. They're lifelong learning."